Last Sunday, I took a train to Rotterdam to visit the “Viktor & Rolf: fashion artist 25 years” exhibit at the Kunsthal. This exhibit is ongoing, the closing date is 30 September. During this period, the documentairy “Viktor & Rolf: Because We’re Worth It” is viewable online. Here are some pictures of my favorite works: 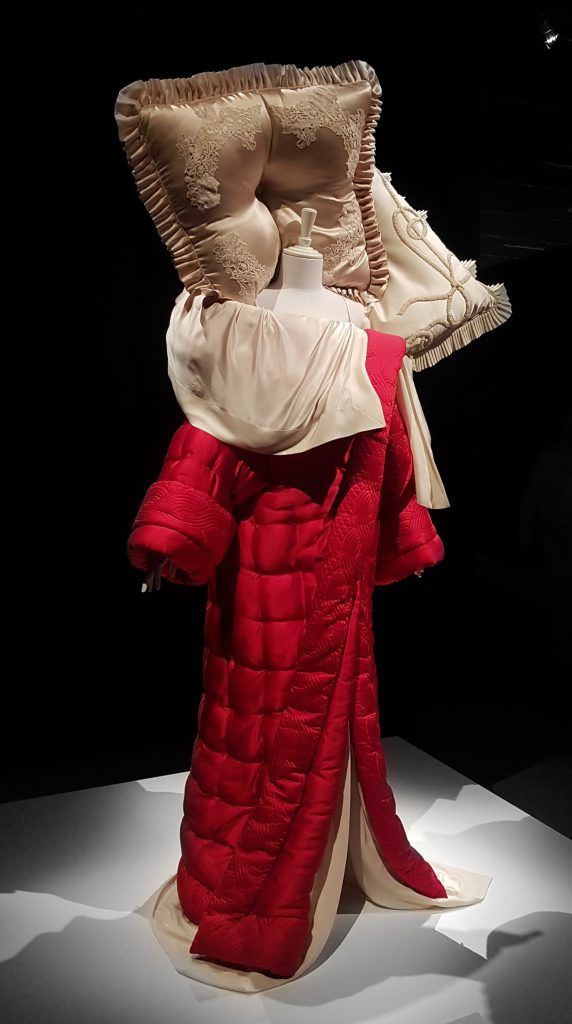 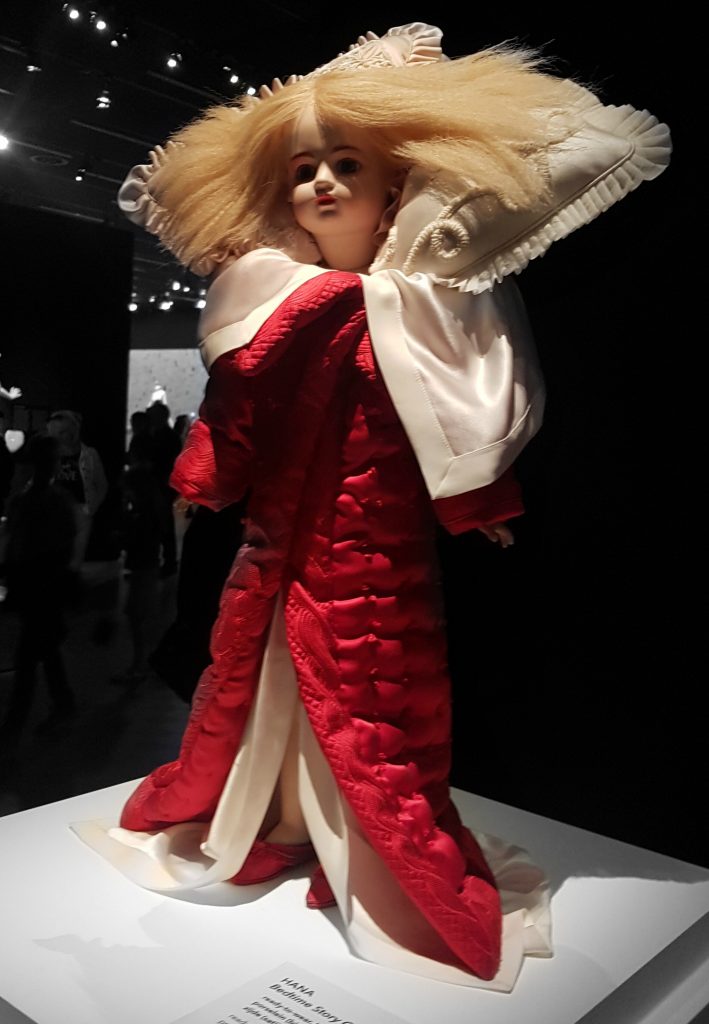 This is the same dress as above, but miniaturised and shown on a doll made specifically for this exhibit, that looks exactly like the model who originally wore this dress during the fashion show. Throughout the exhibit, there were several of these dolls, and no, I didn’t steal any of them. I wanted to, though. 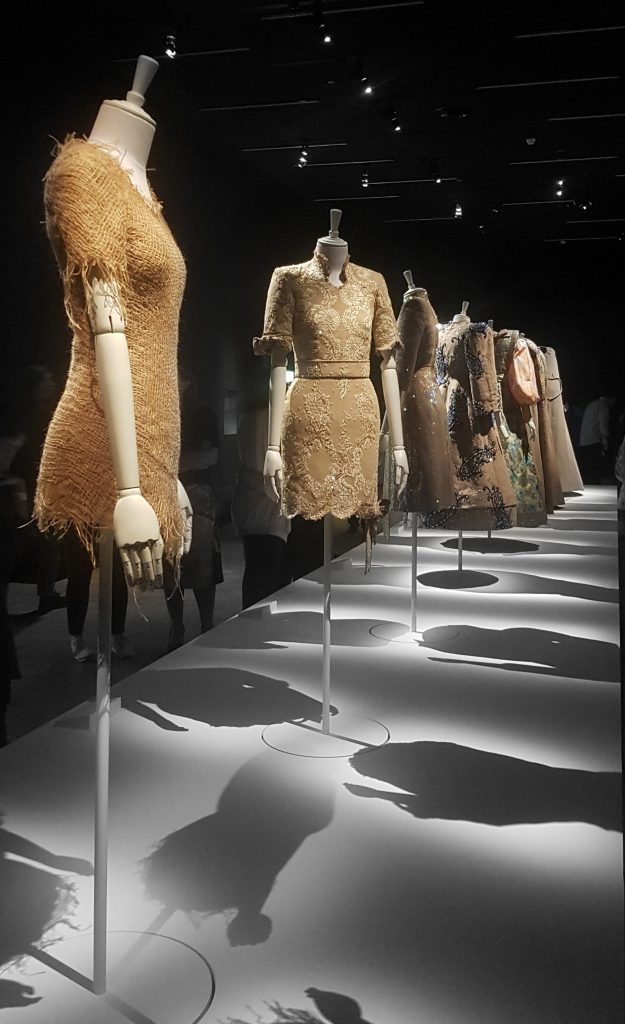 Russian Doll Collection, haute couture fall/winter 1999 – 2000. All the clothes seen here, were worn by model Maggie Rizer simultaneously. For anyone curious as to what that looks like, here is a 16 minute video of the complete fashion show. 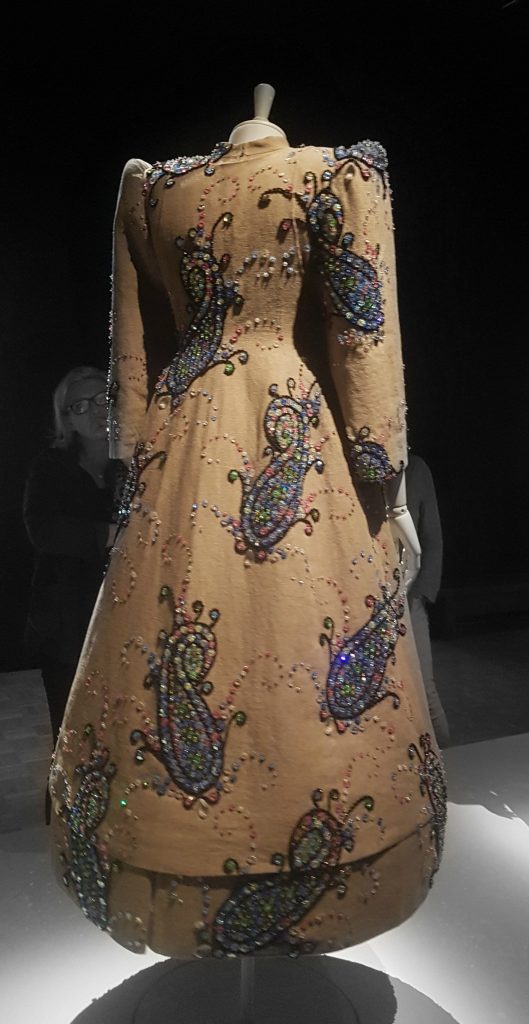 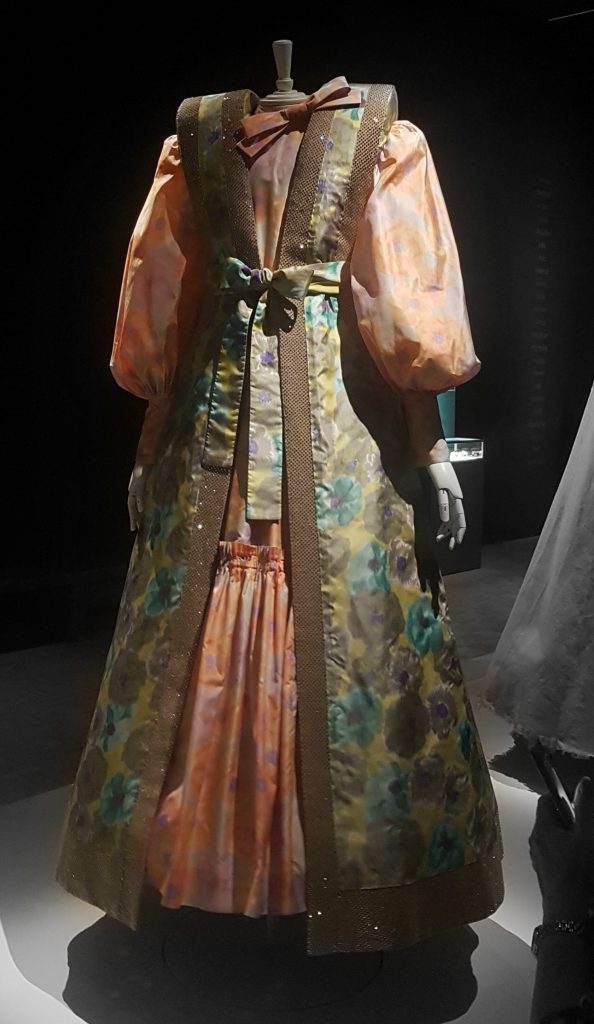 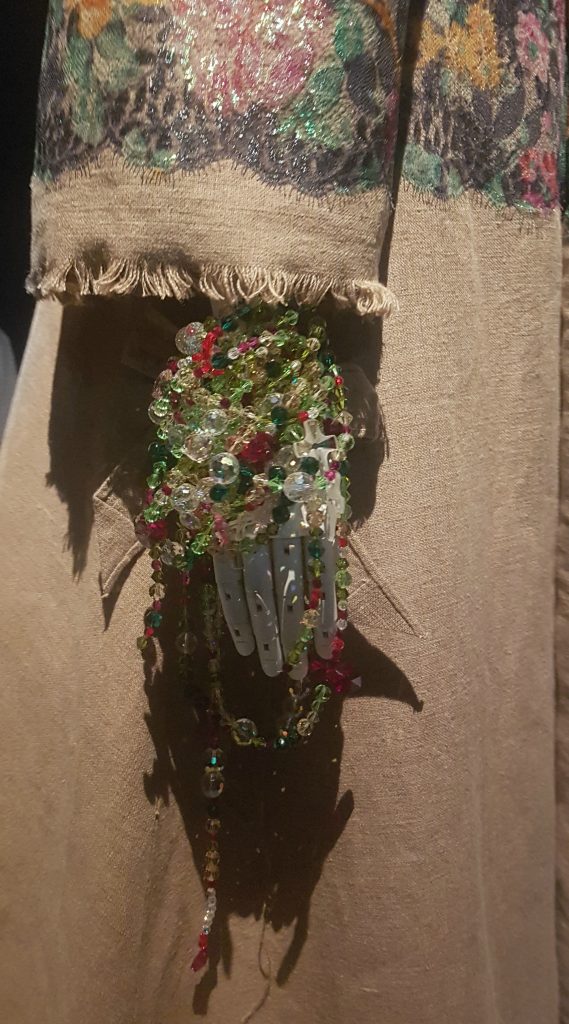 Russian Doll Collection, close up of the seventh preparation.

Le Parfum, 1996. Their first perfume: it had no smell and you Het eerste, geurloze en bovendien niet te openen parfum. 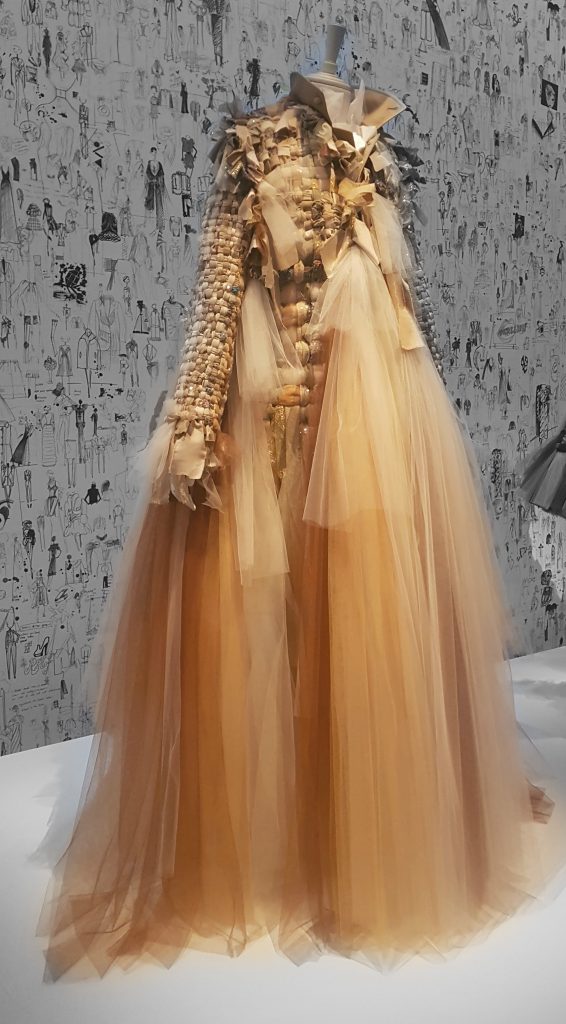 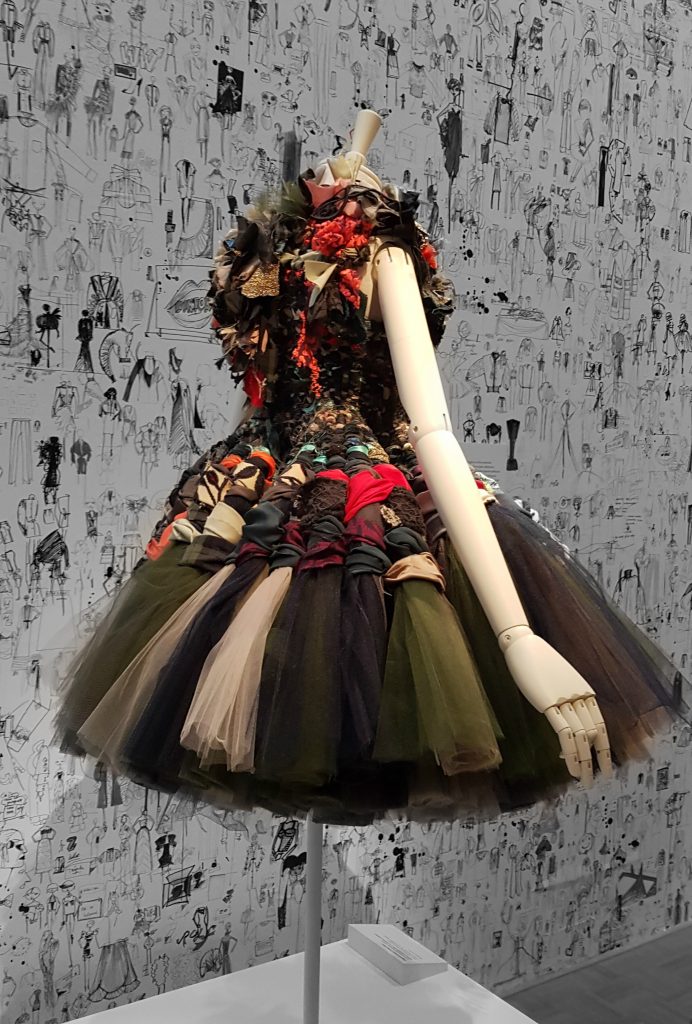 If you are able to visit this exhibit, please do! And yes, the drawn wallpaper is available for purchase in the gift shop for 29,95 euros per square meter.

Recently, I’ve noticed a new trend: failure is in. Where back in the day, you were expected to get to the top in one go, nowadays there’s a lot of attention for failure: articles that emplore you “Free your failures” and to “Fail better”, tenured professors that share their “Failure CV”. Last year, a “Fuck up night” was organised here in Amsterdam.

At first, I found this refreshing: finally there were people who dared to admit that sometimes things don’t work out and who proved that a mistake doesn’t mean the end of everything ever. It took the pressure off a bit in these days of “everything should be perfect at all times”. But as time went by, my feelings about this “failure” phenomenon changed. Where in the beginning it felt like a sincere attempt at comforting and encouraging people, it has now turned into a display of “Look at how epic my failure is!” There is an atmosphere in which successful people try to one up each other with stories of their best failures, with their “failures” actually being small to medium set backs at best.

Failing 2.0 is apparently only a thing for a very specific type of person. The type of person for whom the effects of their failures are relatively limited: I’ve never read a “failure story” in which a thing like losing out on 50.000 euros in a bad business deal ended with having to claim unemployment benefits, having to work shitty jobs, and paying off a debt with a very high interest rate for years. No, in these stories the “failer” just starts a new start up, because they have friends and funds.

And all the stories I’ve read from people who felt “completely destroyed” when they didn’t get into the Phd of their dreams, are always told – years later – by tenured professors. I’ve never heard anything from the “failed” Phd candidate who now works in the Cool Cat (clothing retailer – ed.) warehouse, and who struggles with severe depression. Because that would be considered an excessive amount of failure. Just like with authenticity and “being yourself”, there is also a limit to how much failure people think is acceptable. And you need to follow up your failures with success of course, because if you keep failing you’ll just make people nervous.

Failure 2.0 is a necessary, humbling step in an otherwise succesful life. It’s the thing that teaches you about yourself, which makes you better and stronger, after which you need to share your story with the rest of the world, stating “I did this, so you can too!” This of course with absolutely no regard for the privileged starting point of the “failer”. I’ll be the last to deny that it’s extremely painful when your franchise goes bankrupt, or if your academic career stalls. And I absolutely understand that these set backs feel especially huge if you have never had any sizeable set backs in your life before. But by presenting these set backs as catharsis and following them up with an “inspiring” call to action, you are basically repackaging the same old principle of “everything is always possible for everybody all the time as long as you really, really want it”.

Because apart from there being zero acknowledgement that a set back is not the same as failure, and that even set backs impact some people’s lives way more than it does others’, there is also a huge lack of support for people who can’t seem to come back from their failures. The people who don’t manage to become succesful (again), because they lack necessary resources like health (both physically and mentally), intelligence, money, friends, a network. Or the people for whom this latest failure comes on top of a long, difficult life path, and who can’t muster up the energy to fight anymore. There’s little compassion for them, they either get victim blamed (“Just do it!/Bootstraps!/You can do anything as long as you really want to!”) or just flat out ignored. Nobody pauses to consider their reality, because it makes us uncomfortable.

The current acceptance of failure is fake. It’s just one status quo being replaced by another: where back in the day you were expected to go straight to the top, nowadays you need a “good” type of failure on your path to success, that you can overcome and – once actually succesful – use as a way to demonstrate your personal growth and relatability, hashtag inspirational.

But if you stumble and for some reason don’t manage to get up, you’re still just an old school loser.