Despite it being the 14th time writing an end of year post (I had a different blog before this one), it just doesn’t get easier. But then again, writing is never easy for me. In the last few months in particular, it took a lot of effort to get words onto paper. I blame a summer of writing increasingly more urgent requests to the housing co-op to fix the roof. I mean, I love pools, but I don’t want to wake up to one in my living room ever again. By now it’s become a funny story to tell at parties, but this whole situation did take a lot out of me energy wise, and being drained of energy isn’t conductive to creating.

All in all I did manage to write and post 78 posts in total, so 39 per language, this post included. The most popular post was my rant on why I hate the song “Africa” by Toto, though my posts about interpersonal relationships never ending in a natural way anymore due to social media, failure 2.0 and my reasons for never wanting to be part of a writing community anymore also led to conversations and “I feel the same way”‘s. On top of that, I got heartwarming responses to the post in which I write about my lack of comfort zone due to my general anxiety disorder. Also, commenting on instagram, both on posts or in DMs is the new commenting underneath your post in the comment box. Just so you know.

Like every year, I will be on a scheduled internet break from now until January 3. In my time off, I will try to add some books to my “read” pile on Goodreads, because 8 non study books is, yeah. I did however (re)read a lot of articles and study books, because as my loyal followers on Instagram already know, I have rebooted my thesis project. As soon as I’m done, you’ll be the first to know.

On to the round up:

Waking Up at 5 a.m. Isn’t Enough to Make You a Successful Entrepreneur.

A short documentary on how modern insta make up is influenced by drag.

A mysterious meat allergy, caused by ticks. I do want to add two things: 1) I really can’t deal with the dramatic “My life is basically over because I can’t eat (certain) meats anymore!!!”. There are billions of vegetarians in the world, who manage just fine. Of course I’m biased, but I’d say that becoming vegetarian/vegan is a better option than munching on f*cking emus, but hey. 2) This piece just reinforced my opinion that we need to cut out all animal everything from medications and vaccines. Pigs need their own heart valves and they can’t give informed consent. And if there was no green monkey extract in vaccines, we wouldn’t have to painstakingly check if this green monkey extract will set of an allergic reaction in people with this particular meat allergy. And I will never have to wonder if I’ve been injected with green monkey extract the last time I got a vaccine.

Music from the series Bagpuss has been released on LP and CD. For those who have no clue what a Bagpuss is, here’s an interview with the creator.

Did you know a Dutch doctor invented the artificial kidney?

How to create a realistic face prosthetic.

I never wanted to go on a cruise ship as just looking at one from a distance terrifies me, but after reading this article I’m definitely never setting foot on one: Why do people keep falling off cruise ships?

How to get over productivity guilt? One day I’ll manage to overcome this. One day.

What can we learn from people who succeed later in life? Especially the line “If you are repeatedly failing at breaking through, you may very well be pursuing the wrong vocation” hit me like a ton of bricks.

Similar to my post about Failure 2.0, Dutch newspaper de Volkskrant wrote an article about the trend among social media celebrities to be “vulnerable”, and how relatability and money relates to this.

I do not agree with the Dutch fireworks policy (hint: it’s a mess), but if you do decide to light some explosives on fire while drunk, please wear eye protection. Dutch rapper Donnie was asked to write a PSA about it:

“Knal” means “pop” as in the sound something exploding makes and “planga” is a slang word for “sunglasses”. /Dutch lesson

I only saw Dutch language documentaries this month, that I only list in the Dutch version of this post.

The iconic IAMsterdam letters are gone. Despite this gif I made a years ago

when this monstrosity was blocking my view, I will miss it. It really is an end of an era.

Mitch Hedberg talking about how he’s the one that gets to decide how many bedrooms his house has and where those bedrooms are situated. For those thinking “This is the funniest shit ever!” this is a clip from his show Mitch All Together.

That’s it! Thank you all for reading, liking and commenting (both here and on insta), I’ll be back on January 3rd!

Last summer, during my handlettering workshop at CREA, I first heard of Museum Meermanno. A museum completely dedicated to books: I needed to go there asap, especially when I found out that they were having a Quentin Blake exhibit. 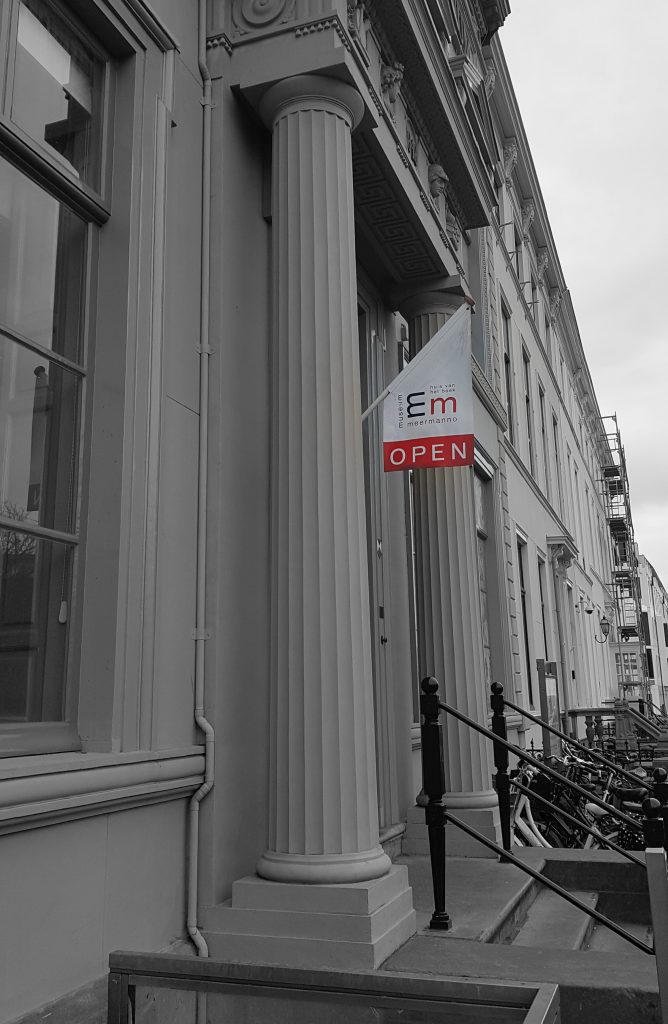 As you can see, the museum building is an attraction in itself. I as usual went “Yup, sure, I’ll move in!”, but I don’t think they were looking for a live in caretaker at the moment. Or at all. Anyway, the museum was a lot larger than I had expected, so I decided to see the temporary exhibits first. Should I run out of time, I would just come back some other time to see the permanent exhibits. 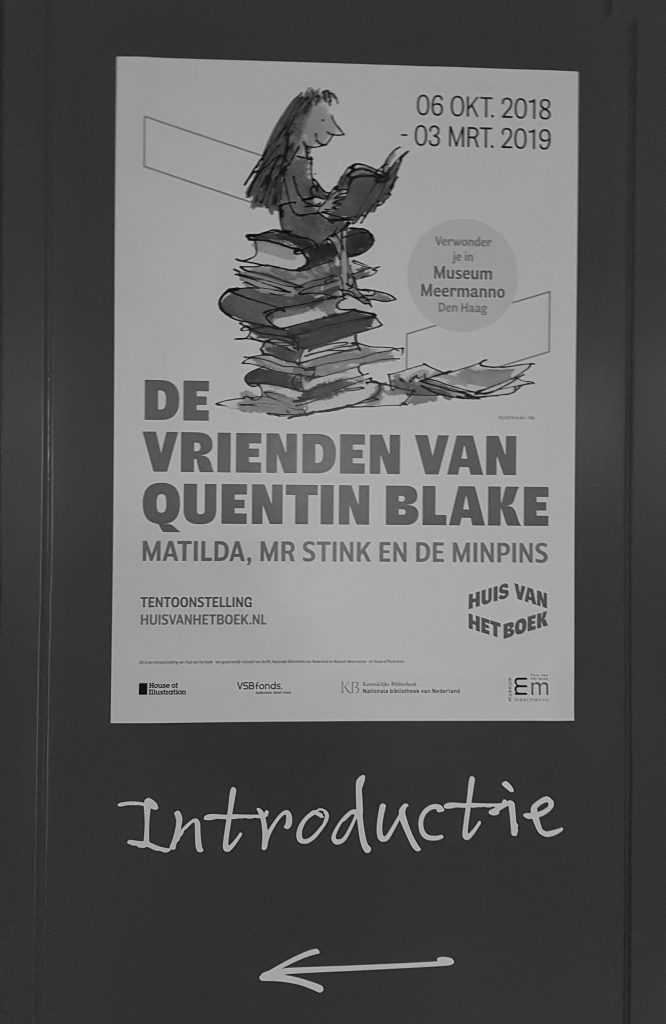 In this day of “there are no rules, walk into an exhibit any way you want”, I am always happy to see clear directions. And arrows. 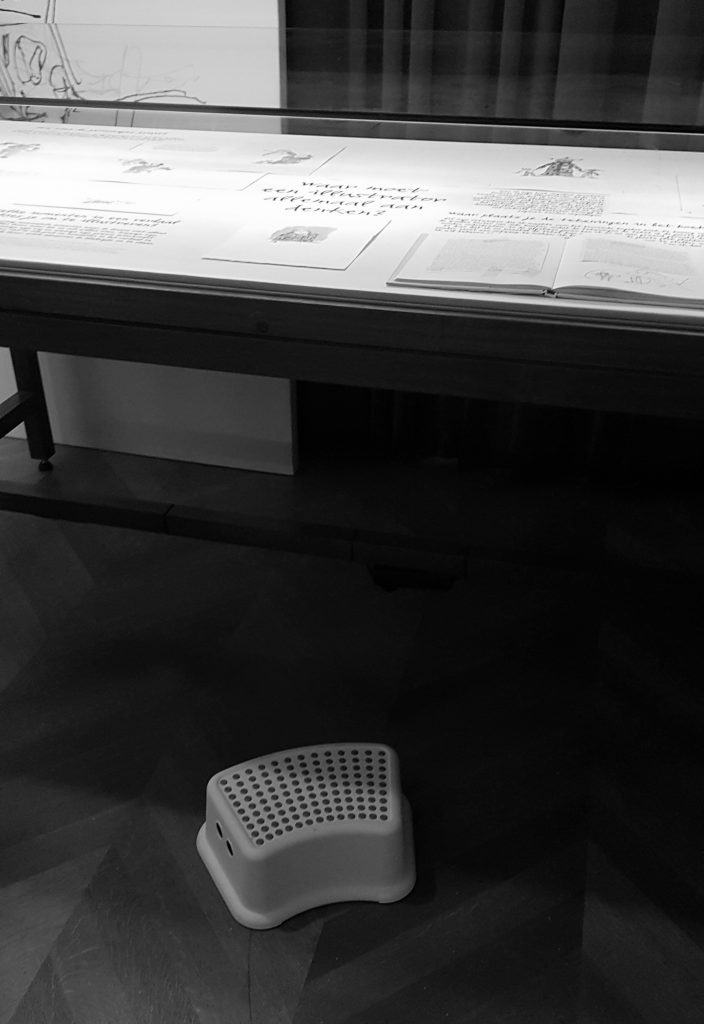 I love that they thought of their target audience and had these little foot stools everywhere. 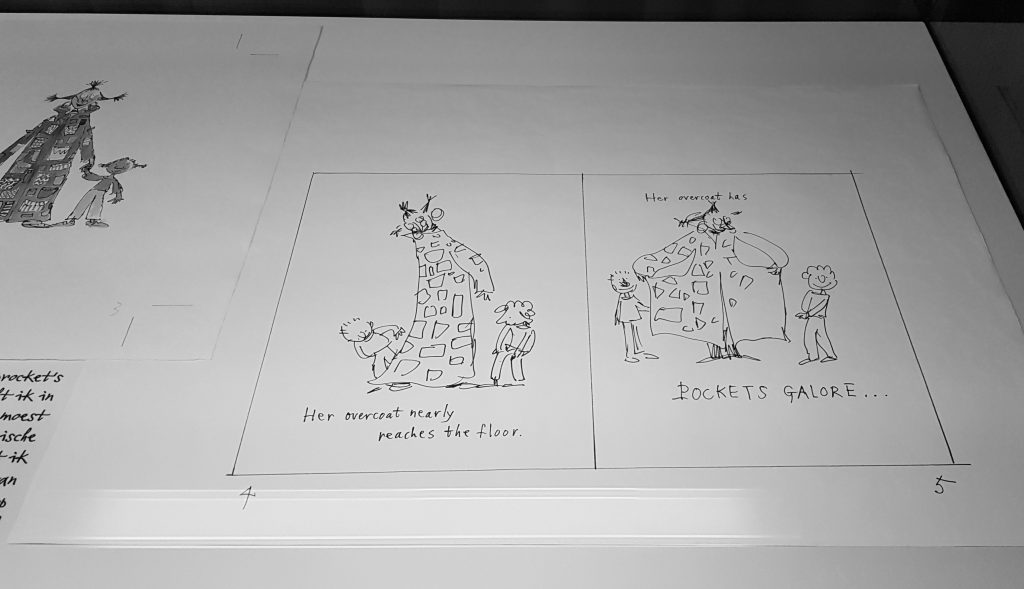 What I really liked about this exhibit is that they didn’t only show finished work, but also a lot of works in progress. Quentin Blake takes you with him through his work process and explains why he made certain decisions when creating certain characters. He also shows that sometimes creating illustrations is quite literally trial and error, which is encouraging to anyone who tries their hand at creating things. 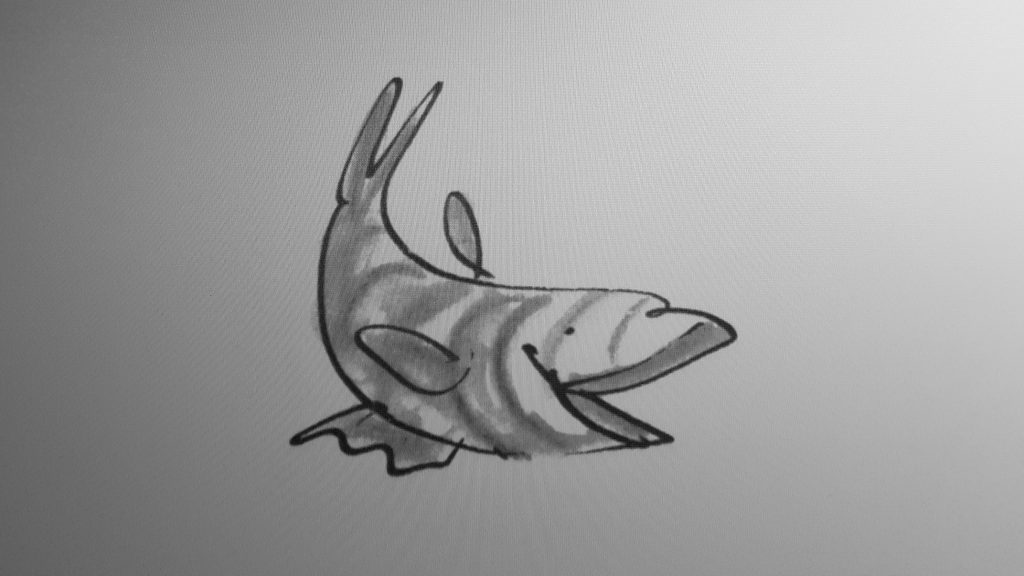 This fish is everything. <3! 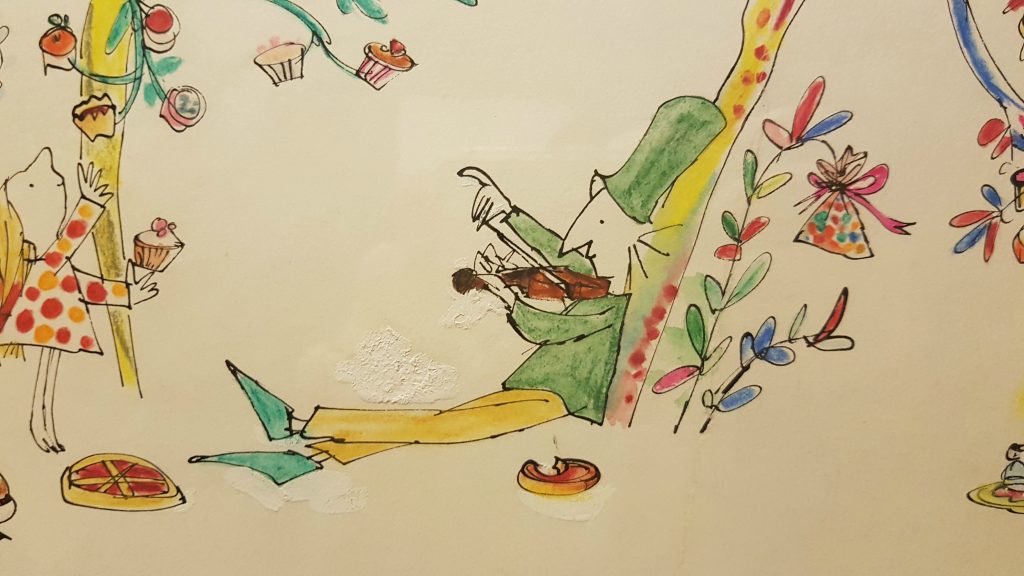 A close up of an original illustration from his very first book. You can still see the white out! 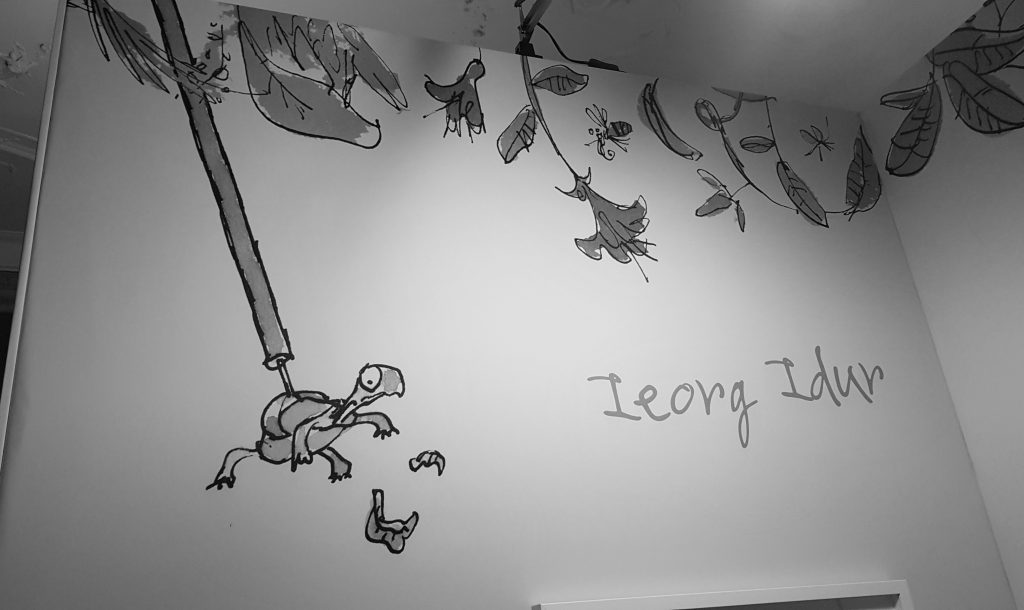 One of my favorite illustrations from ESIO TROT, a charming story with a happy end. Yes, even for this tortoise. 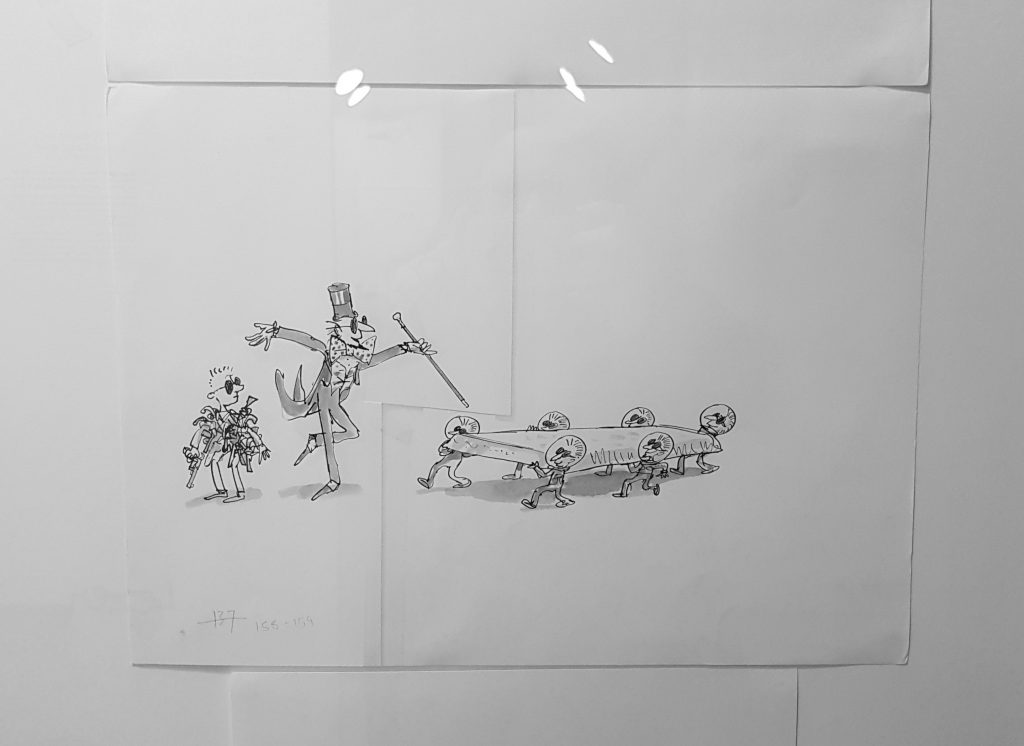 Early character sketches for Charlie and the Chocolate Factory. 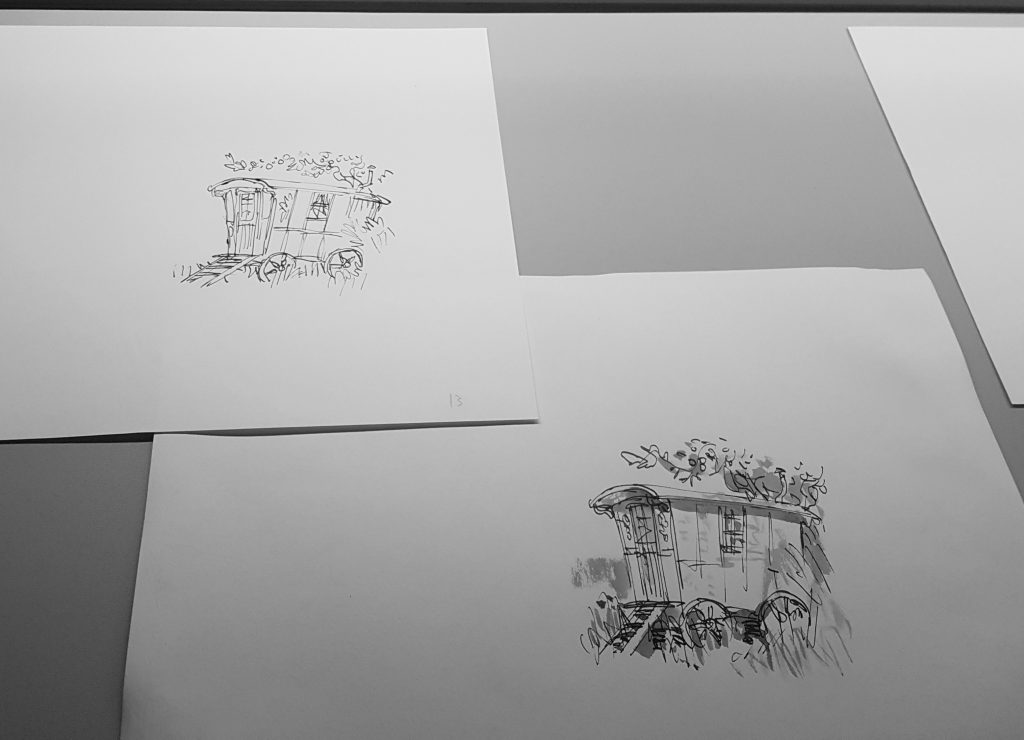 The sketch and the final published illustration. 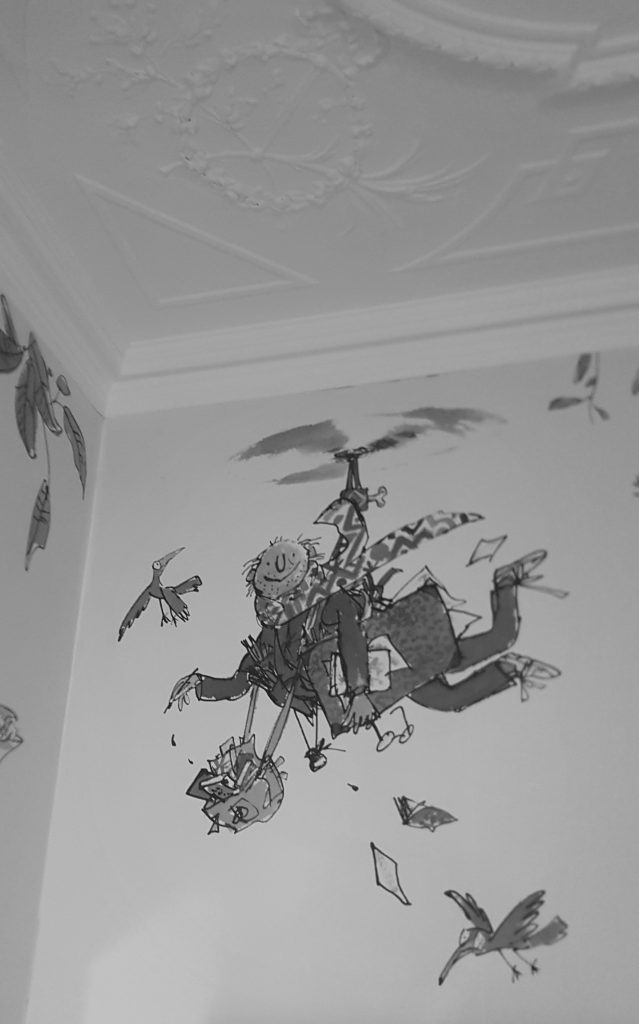 This extensive exhibit chronicles his entire career up to now, and not only features finished drawings and works in progress, but also books and (video) interviews. However, since this exhibit is still on until 3 March 2019, I’ll leave it at this short impression. If you have the chance to go to Museum Meermanno in The Hague and see it for yourself, please do. You won’t be disappointed!

Forty years ago, the Hollywood sign was restored completely.

Despite it of course being very wrong to mislead people like this, I do kind of admire the guts of the band that managed to book a European tour by faking their entire fanbase. It also shows the weakness of the current system where social media and likes reign supreme. And in a roundabout way, their trickery seems to have garnered them some actual real life fame now too.

Longread on the Los Angeles cult of betterment, that sometimes literally leads people into the hands of actual cults.

Pop music is such an old genre by now, that pop stars are getting old.

An interview with Florence Welch.

Video killed the radio star, the making of.

Reasons why a disproportional amount of YouTubers are dealing with burn out related issues.

Interesting article on M.I.A. and Lily Allen: “staying loud in a world that silences women“.

For reasons unknown, people seem to think that I’m a big fan of Lena Dunham(‘s work): I am not. I did struggle through the first season of “Girls” when it came out, because in those days, I felt I couldn’t reject things without having seen them. And I of course do not know her personally , but lets just say that this interview confirmed what I had concluded after all the information I had gotten about her over the years: that she suffers from a severe case of the LOL edgies combined with chronic foot in mouth disease. For those going, “Wow, LP, that’s kinda mean!”, not really.

Rookie Magazine is calling it quits. Tavi explains why in her last editor’s letter.

Interesting longread about ways of helping people who are suicidal.

Face it, Black Pete is blackface.

Note: I don’t mention 100% Dutch language podcast/documentaries in this blogpost, but I do on the Dutch counterpart of this post here.

I hate it but I love it on Labyrinth.

Vilshult, a short and bittersweet documentary about “that IKEA poster”, you know, the one with the canal and the red bike.

Synth Britannia about the rise of the synthesiser in the UK.

Modern DIY DOLLHOUSE (how to make a cardboard dollhouse WITH LIGHTS).

HOW TO: tie a turban with large bow.