Part 1 can be read here

It didn’t take long for me to realise that “Not doing a damn thing ever again” was harder than it seemed. Especially when it became apparent that this pandemic was going to last longer than the predicted two weeks, I had to come to term with the fact that “Never doing anything again” is just not a sustainable long term plan.

Maybe this would have been different if I had lots of children, a huge extended family and a gigantic amount of friends, but I don’t. Then again, even if I did, most people have other things to do with their lives than entertaining somebody who’s decided to never do anything ever again. If I wanted to or not, I had to figure out what I was going to be doing with my life.

Thinking of something new to do wasn’t easy, as I am a person of limited interests: cats, classical ballet, zines and other magazines, exhibitions, concerts, ceramics, and Funda (an online real estate market place); that’s pretty much it.

What also didn’t help, was me being near-catatonic with fear that I would catch Covid and end up severely sick. Despite all this, I finished up a large work related project, and had a fit of insanity where I joined a writing group. Twice. Let’s just call it a relapse. I also took a couple of online classes to try and keep myself together.

Thirteen months into this two week pandemic, I finally got my first vaccine. Turns out thinking about your future is a lot easier when you’re not constantly fearing for your life.

And so it happened that while reading the weekly ARCAM newsletter, I thought: “If I could do my life over again, I’d become an architectural historian”. Despite being quite certain that you’d have to had studied architecture to be able to do that, I did a google search. It turned out that my English BA wasn’t so useless after all: I just needed to do a minor in Architecture and Construction to be eligible to do an Architectural History MA. Another option was to do a General History pre-master, but I was afraid that that would not give me sufficient specific architectural knowledge to do the MA.

The decision to do the Architecture and Construction minor seems to be a good one: I’ve already passed three out of five classes, currently finishing up class number four before starting class number five in two weeks. This study year is moving at the speed of light, partly because the 8-8-4 system remains a very tight schedule, even part time, but also because… everything is organized? I am not spending 40 to 60 percent of my time trying to manage the logistics of my studies, I can just dedicate myself to the content. What’s also different, is that, after a life of unsuccessful overachieving, I nowadays do the bare minimum. Though that’s still taking a bit of getting used to.

When I decided to return to university ten years ago, I had a plan: I was going to do a BA in English, which would take three years. I was hoping that within those three years, one of the Dutch universities would finally have started offering a Creative Writing MA, which I would then apply to.

At least, I thought that was my plan. It was only in hindsight that I realised that – deep down inside – I had a lot of other expectations: returning to university was going to be THE BEST THING EVER, to the point that it would erase my previous shitty-to-mediocre experiences at university. People were going to discover that I was the greatest structuralism-genius since Foucault and everybody was going to LOVE me. Returning to university and getting my BA degree was going to fix everything that ever went wrong in my life. Deep in my heart, I was completely convinced of this.

Considering that, it’s no wonder that my return to university turned out to be a huge disappointment.

It was only a few years ago that I learned that this type of childlike thinking is quite common for people whose lives haven’t turned out the way they wanted them to. Children who are bullied for example, are powerless to change their situation by themselves, no matter what victim blamers people may claim.

More often than not, they keep themselves alive by telling themselves things like “When I grow up, I’ll show everybody that I can do [something exceptionally awesome]”. Which is understandable, especially when nobody takes you seriously and the constant, soul shattering bullying is dismissed as “It’s just a joke” and you’re told that “You’re also a bit at fault here of course”. Delusions of grandeur are needed to keep your spirits up and keep yourself alive. Literally.

Apart from that, there’s a non-stop stream of success stories everywhere in the media. My return to university coincided with the heyday of hustle culture: as long as you work as hard as possible, preferably all the time, without pause (“You can sleep when you’re dead!”), success is guaranteed.

Sure, you have a bigger chance of becoming successful when you do the work, but there’s no guarantee whatsoever that working yourself to death will lead to guaranteed success. I would say the opposite is true. The sad part is that, rationally, I was well aware of this, but I still felt attracted to this extreme way of thinking like a moth to a flame. It has to do with my need for control and the illusion of a person’s life being completely malleable. The fact that I’m a foreigner and that both my parents were refugees is also a huge factor: being successful within academia is the only way to not disappoint your parents and compensate for the misery endured, basically. This suffocating pressure to succeed is something I’ve felt all my life, and I’ve never known how to deal with it, except for to internalize it.

Fact is that no studies, and definitely not the ones you started at 35 for all the wrong reasons, will make you super happy, mega successful, and loved by all. Life is not a fairy tale, where all your lifelong problems get solved in an instant.

Apart from all this, the particular studies I chose turned out to not be for me. I’ve once described my studies as “speedreading every published issue from Reader’s Digest”, which gives you an idea. Looking back, I should have quit in week four, that would have saved me a lot of money, time, energy, and both mental and physical distress. Unfortunately, I was completely stuck in the “Quitters are losers”-mindset, that my motto “Get a BA or die trying!” almost became a reality.

The only reason that, after my stroke, I eventually wrote my thesis and graduated, was because of the sunk cost fallacy. And the example of the North-South-metro line, which turned to be pretty useful once it was finished after years of delays and exorbitant budget overruns. The fact that I would be able to do an MA was not an incentive to finish my BA, because by the time I graduated, there still wasn’t a Creative Writing MA in The Netherlands, and the long distance MA Creative Writing in the UK that I was going to do, became unaffordable due to BREXIT.

Where I publicly (even on this blog) said socially acceptable things like “I’m going to take a year off to decide on what I’m going to be doing with the rest of my life”, in reality I – of course – already had a plan: I was never going to do anything ever again. Never. Not a damn thing. I felt that I had done enough things in my life, with zero results, so I was just going to quit doing things.

And then the pandemic started.

Part two will be posted tomorrow!

Internationally renowned journalist Bram van Splunteren, famous for his long form documentaries on alternative bands and culture in the ’80 and ’90 acknowledges that he had a – what he considers to be a – relationship with a subordinate. Proceeds to describe himself in those days as “young, dumb and naive”. DUDE, YOU WERE 36! SHE WAS 18! YOU WERE HER MANAGER. I don’t give a shit about how different times were, this has never been ok. I grew up watching his programs and looked up to him for his interviewing/program making skills, but he’s firmly on my shit list now. (article in Dutch) VPRO trekt eerbetoon aan Bram van Splunteren terug, documaker erkent oude beschuldigingen

France formally recognises endometriosis as ‘long-term condition’ And now the rest of the world, please

A Mega-Rich Silicone Valley Town Says Mountain Lions Make it Immune to Affordable Housing Yeah, but when it comes to their own (house) building activities, it’s usually more like this: 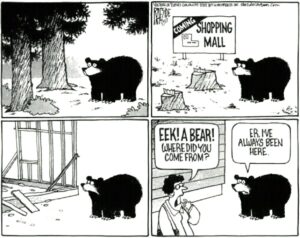 A Dog and Cat Bill of Rights Under Consideration in California

Trevor Noah slams media for racist remarks on Ukraine: War ‘was Europe’s entire thing’ It’s been REALLY jarring to see how things are playing out. Haven’t heard the words “refugee crisis” yet, despite there being more people displaced now than in 2015. But apparently we don’t see it as a crisis when the people suffering are white? War is awful and useless, refugees are refugees and need help, please stop being racist assholes everybody

WILLOW, THE ANXIETY, Tyler Cole – Meet Me At Our Spot (Live Performance)

Sarah Millican Received An Email From Her School Bully

The Story of “It Wasn’t Me” by Shaggy