Hi! I’m LP and I feel a deep, deep hatred for the song “Africa” by Toto!

I’ve felt this almost physical disgust since the first time I heard this song on TopPop (a legendary Dutch pop music show), sometime in 1983. My hatred is such that I don’t even have to hear the song, just thinking about it makes my blood boil. By “thinking about it” I of course mean “playing the song in my head” because I of course know it inside and out. And backwards.

I’m not sure why I have these strong negative feelings towards this song. It’s not like I’m a music snob or anything: I unironically love Wonderwall with all my heart. And it’s not like I can’t appreciate bombastic ‘80s music: “Red Rain” is one of my favorite songs ever. Hell, I don’t even mind getting Rickrolled. But “Africa” makes me want to pick up an axe and split something down the middle. Forcefully. Seeing that I strongly believe in “Know Thyself”, I decided to analyse my feelings – by analysing the song. To make sure that I haven’t changed it all up in my head throughout the years, I put it on and listened to it. Oh boy.

The intro. “TA-tata-tatata-TA”. An annoying pattern if there ever was one, especially if it’s repeated 4 times and is accompanied by a weird kind of marimba/kelimba sound produced by a synthesizer. Despite the song being called “Africa”, this is not an African rhythm. It’s more of a Jazz Fusion style Latin-rip off, and there’s no musical genre that gets on my nerves as much as Jazz Fusion does: There’s just way too many notes a second happening.

Here comes the first line: “I hear the drums echoing tonight”, because the intro could make you forget that it’s Africa we’re talking about here. Because in Africa, there’s of course always drums echoing somewhere, right? *rolleyes* The dude that wrote this song clearly suffers from a case of the “Africa is a country”-syndrome, because the lyrics are littered with the type of heavy-handed clues that give me heart burn: an “old man along the way” who has to provide him with “some long forgotten words or ancient melodies” (Magical Negro trope, anyone?), there are of course “wild dogs” who “cry out in the night” and just when you think it can’t get any worse, there’s this beauty: “As sure as Kilimanjaro rises like Olympus above the Serengeti”.

This. Is. Fucking. Bullshit. First of all, the Kilimanjaro and the Serengeti are nowhere near each other, and second, and this is where I start foaming at the mouth, YOU CAN’T JUST DECIDE TO START PRONOUNCING IT AS “SE-renget-I” TO SQUEEZE IT INTO YOUR MELODY LINE.

Ok, let’s go back a bit, because the first line is also the only line that is intelligible in the entire song. Anyone who’s ever heard this song being “sung” along to in a café, knows that it’s mostly mumbling until the chorus sets in. Yes, that’s the part where the singer all of a sudden, and for no reason, starts singing about an octave or two higher than he was before. For years, I thought that this was a case of “badly connected head and chest voice”, but it turns out it’s just a completely different dude than the dude that mumbles through the verses. Not that chorus dude is more intelligible. For those thinking: “Oh come on you whiner, I understand him just fine! I always sing along to this part at the pub!”, here’s a quiz:

I’ll give you line 1, which is “It’s gonna take a lot to drag me away from you”. Now the next line is

It’s b, but it could just as well have been any of the others, because WHAT IS THIS SONG ABOUT ANYWAY? I still have no clue.

But first, let’s get to the banger: the first line of the chorus! Which is:

a) I was raised down in Africa 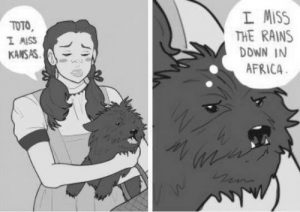 b) I miss the rains down in Africa

c) I piss in the rain down in Africa

Ha! Catch question! Because nope, it’s none of the above. It’s “I bless the rains down in Africa”. And why would he be doing that? So that they can “do the things they never haaaaaaaaaaayahaaahyaaaahaaave”. Which would be banging. We now have an answer to “WHAT IS THIS SONG ABOUT ANYWAY?”: it’s not about Africa.

The track continues: another mumbly verse in that forced melody line, still that annoying pattern, more and more instruments, it’s like a steam locomotive storming towards another chorus. My God, this song is STUFFED. There’s no breaks or pauses, none of the instruments decide to lay low for a bar or two. Every second is filled to the brim with music, it quite literally takes my breath away – and not in a good way. I have to admit that “When Doves Cry” is my favorite song ever, so I might be on the other side of the preference spectrum when it comes to how “full” I like my tracks, but it’s worth it to compare “Africa” to “Take it easy” by the Eagles to hear what I mean. That is also a song in which a lot of stuff happens, but it feels way less like a massive piece of wood being repeatedly banged against your head. Or maybe I’m just biased, because the Eagles are love.

Anyway, we trudge through yet another chorus and then… there’s a synthesizersolo that seems to have walked in from a completely different track. If you’d gone to the toilet at the beginning of this track and are only now coming back, you’d be tempted to think that you’ve gotten out of the “Africa”-hell and instead have been transported to another, more “The Little Mermaid”-style hell. But thankfully then there’s another one of those #@$$%^#$ choruses, and now the dude starts ad libbing and here’s another rain being blessed in Africa and then we’re done, oh, wait, no, there’s a THIRTY SECOND OUTRO. ON A FOUR AND A HALF MINUTE SONG.

I think it’s pretty obvious that pretty much everything about this track annoys me to no end, but the most enraging, the thing that almost makes me explode into tiny bits of rage and gives me visions of chopping things down the middle with a huge axe is the “ooh-hoo” at the end of the chorus. Glad to have been able to solve that mystery. So anyway, here’s Wonderwall.