About six years ago, on a blog far, far away, I wrote a post about the unbelievably frustrating fact that some people (kept trying to) make appointments with me, to then never keep them. I hoped that me running into multiple people who exhibited this kind of behaviour within the span of one year would turn out to be a coincidence, that at some point it would stop and “Do you want to go for a drink?” would once again be an invitation to go get a drink, and not the start of a highly frustrating cycle of postponements, cancellations and reschedulings. Sadly, it was not to be. In the last 7 years, my social life has been plagued by this phenomenon, and it drives me almost nuts trying to figure out WHY.

If you’re now going “Ugh, kids these days!”, let me stop you right there. Despite thorough analysis I have not been able to identify a particular type of person who exhibits this behaviour, but what they all have in common is that they’re adults. What they also have in common is that they’re people I just met, people with whom contact, let alone friendship, is not established yet. You’d expect everyone to be on their best behaviour in this “dating” period, but apparently not.

I’m not talking about the almost obligatory “Let’s get together sometime!” conversation ender, of which everybody knows that its’s not an actual invitation to get together, but just an idiomatic expression meaning “I enjoyed the time we spent together and I wouldn’t mind running into you at some point, but we’re not actually getting together”. What I’m talking about is people actually reaching out to me to meet up, and who then don’t respond as soon as I answer “Oh, that would be fun! When and where do we meet?” Months later, usually right after I’ve totally forgotten about it, they contact me again with the exact same question, without any acknowledgement, let alone explanation or even apology as to why they never responded to my reply months ago. And as soon as I reply again, I don’t hear back from them. I’ve had a couple of people repeat this maddening behaviour for literal years. Come to think of it, they’re probably still messaging me every so often. I just don’t receive their messages as after about 3 years of this nonsense, I blocked their numbers.

If you thought this was bad, there’s worse: the people who actually DO make an appointment with me at a certain date, time and location, but who then go on to repeatedly cancel and/or reschedule this appointment, more often than not using some weak excuse. Some of them even completely forget that we had an appointment at all, and just don’t show up. A couple of months later however, again without any acknowledgement of anything that transpired before, they’re back with a new “Let’s hang!” message. Which leads to a new appointment. That they again don’t keep. For the life of me, I can’t understand why so many people nowadays keep behaving in this bizarre, and dare I say it – extremely rude manner.

I know I’m old and that the days that I could set up an appointment with a pen pal to meet up at Amsterdam Central station 6 weeks later and we would both just be there without confirming and reconfirming 10 times, are over. And of course somebody’s bound to say something along the lines of “You shouldn’t have too many expectations of others”. To which I always respond “Why not?”, because I really hate this whole disaffected “I don’t really care about anything, so nobody can disappoint me” cool girl thing. Besides, as I also wrote in 2014: “Since when is expecting somebody to keep an appointment THEY initiated considered “expecting too much”? Should I, when somebody proposes to meet up on Tuesday at 12, immediately assume that this appointment isn’t going to take place? How does this make any sense?”

Sadly, I have to admit that nowadays, after 6 years of this nonsense, I indeed immediately assume that these appointments aren’t going to happen. I absolutely hate that it’s come to this, as it’s not how I want to live my life, but apparently there’s a limit to the enthusiasm I can muster for what have more often than not turned out to be false promises from people who are continuously pretty careless with other people’s time and feelings. 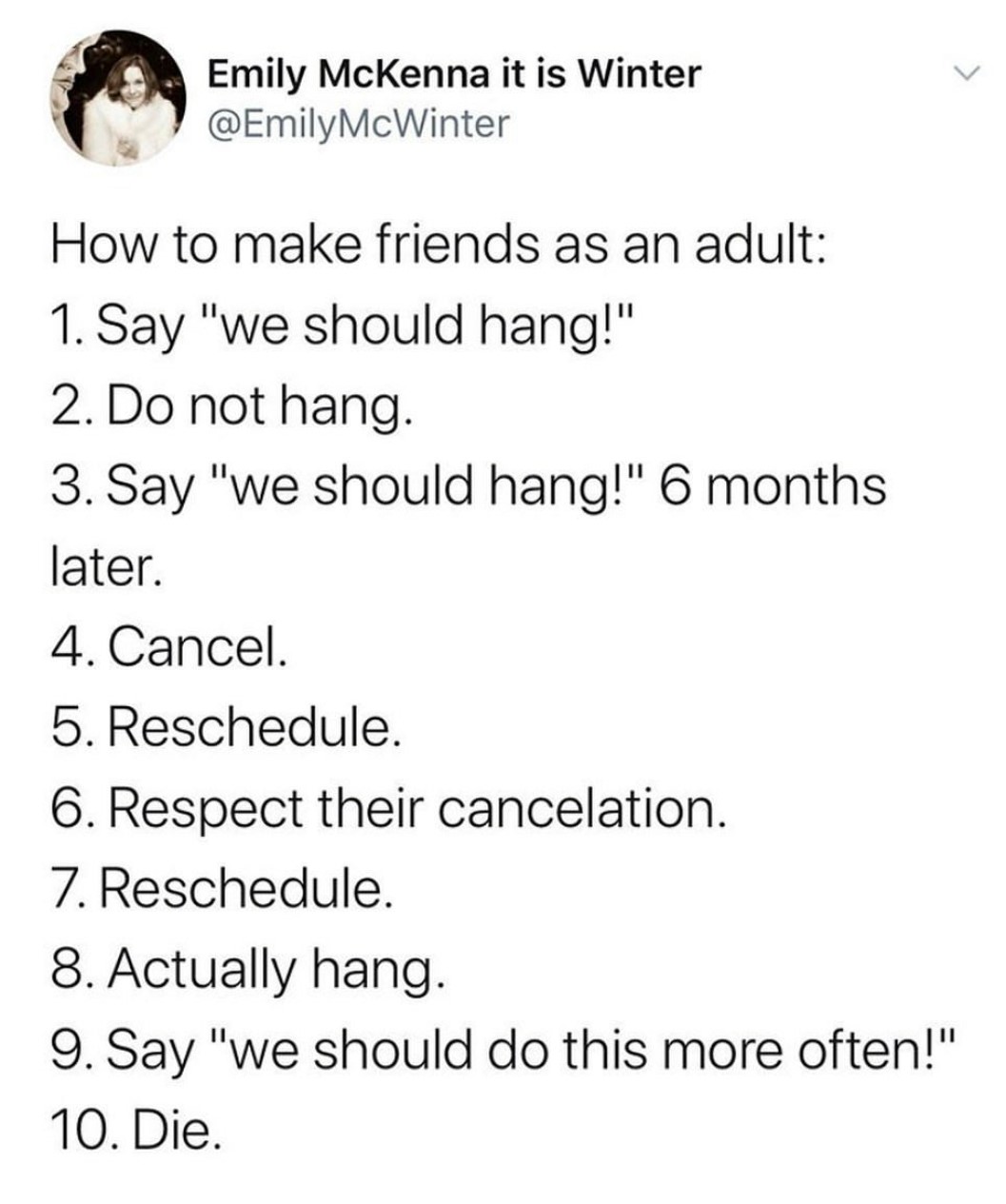 apparently this dynamic is a thing not only I experience. I have in the past reached the “actually hang” and “say we should do it more often” steps, and I of course almost reached the “die” one, but more about that next month. My interactions with other people nowadays stop at step 6 and then loop right back to step 1. Repeat ad infinitum.

Despite knowing that it isn’t personal, I have spent the last 6 years wondering why these people persist in asking me if I want to hang out with them, when it seems from their follow up behaviour that they aren’t particularly interested in meeting up with me. I just don’t understand: why would you initiate an appointment with somebody, if you’re not actually going to follow through on it? WHY? In 2014 I stated that it was particularly strange that they couldn’t keep an appointment with me, as they did manage to show up at work, their studies, their hairdresser or their doctor. I figured that in those cases there might have been a financial motive at play: hairdressers and doctors send invoices for no shows. These days, my sources tell me that even hairdressers and doctors suffer from getting stood up all the time. And that while they do send the no show invoices in an effort to recuperate their losses, most of these invoices don’t get paid either.

Apparently, there’s stuff happening in the world that causes this huge spike in flakiness. Having studied philosophy for a minute or two, I of course have a theory. Assuming that these people actually want to hang out with me, and that they’re not aiming to jerk me around and waste my time on purpose, I suspect it’s (a combination of) one of the following things:

Except for the influence of (anti)social media and the FOMO (go be a hipster somewhere else), I do have some understanding for all the other reasons. I myself have had to admit to myself that, despite feeling bad about it, I indeed did not care enough to keep certain interpersonal relationships going. My life has not always been easy, which is an understatement, I know how hard it can be, and that things don’t always end up the way you hoped or planned.

However, as an adult (because again, none of the people displaying this absurd behaviour were teenagers) you are responsible for your own life and for how you treat other people. At some point, you have to have acquire some insight into the type of person you are, and into what you can(‘t) realistically expect from yourself. At some point, you have to wake up to the fact that you, even if you didn’t mean to, have been stringing certain people along for years, and that you keep making promises that you – for whatever reason – can’t keep. At some point, you have to stop doing this. Because all things aside, at the end of the day, it’s just a really shitty way of treating people.