In the summer of 2018 I took a week long ceramics class at CREA. During that week, I got SO stoked that I decided to go for a 15 week course from February to July 2019. What I like about it so much? It’s tangible. First, there’s just clay. And then you mold it into an object. And with applied ceramics, there’s the added bonus that you can use the thing you’ve just made, like a plate, a bowl or a cup. What I also like, is that the material sometimes “forces” you in a completely different direction than you had in mind. Something about getting out of your comfort zone. But in a safe way. 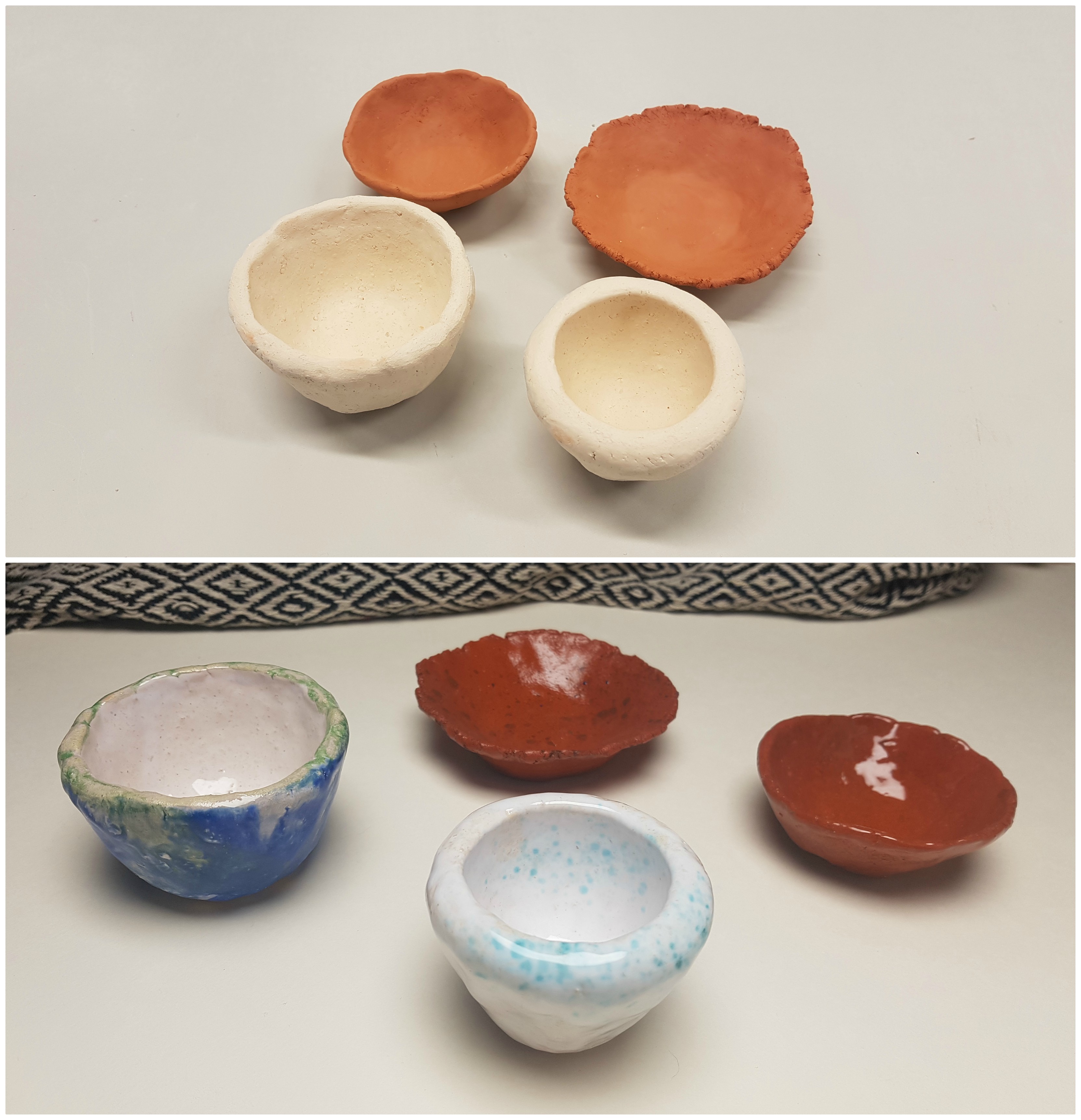 In the top picture, the works made out of both red and fine clay have been baked, but not yet glased. The picture below shows them post glazing. Glazing is the most exciting part of the ceramics process, as there is no way to know what colour a glaze is from the colour of the powder or the mixture. The only thing you can do, is check the name and number of the glaze, and look at the swatches: 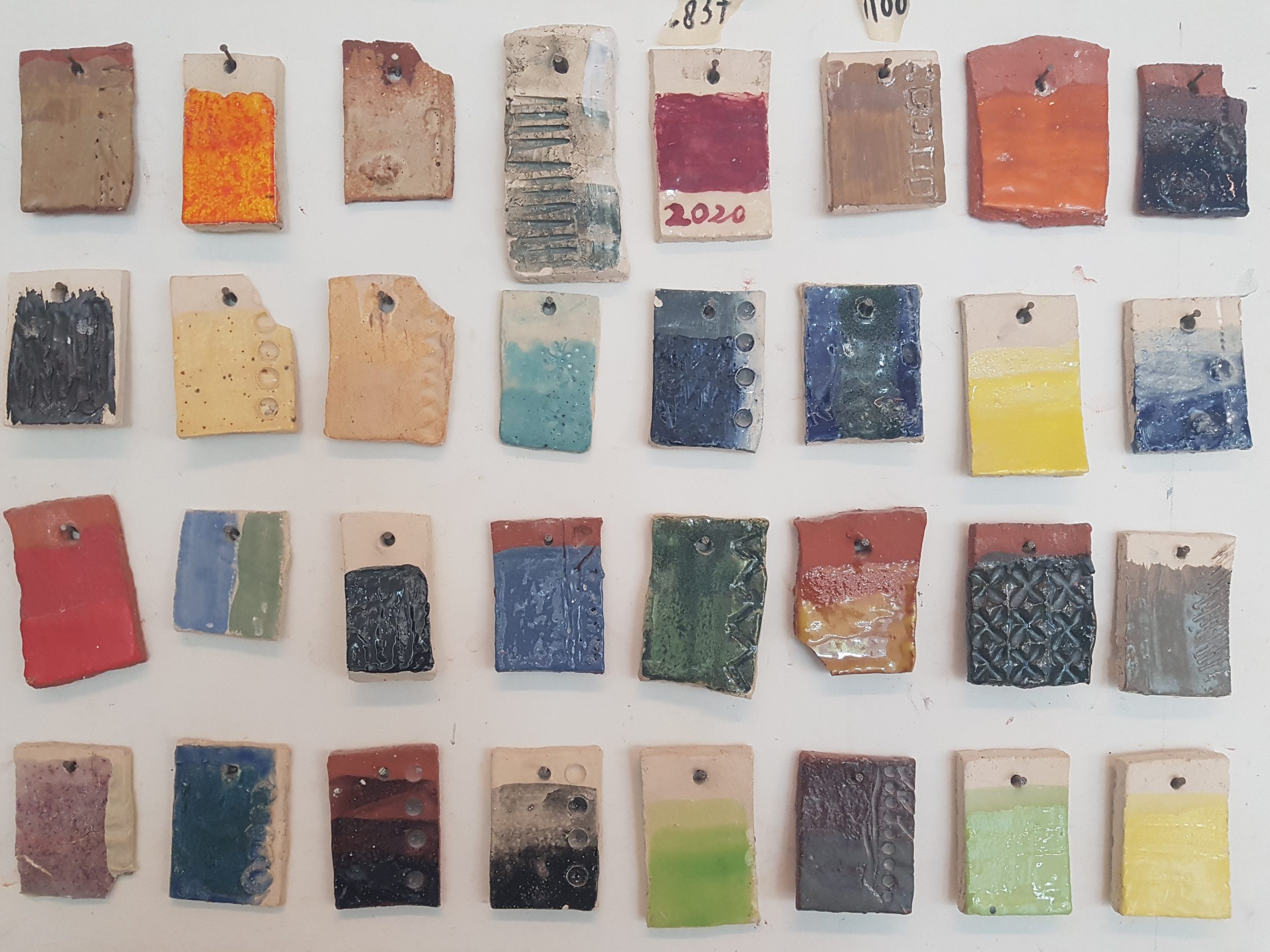 Putting a white emulsion on an object and only finding out after the firing if the colours turned out as expected, is kinda magical:

In the left picture above, you see the jar and the cup with glaze on them, right before they were put in the oven. On the right, the finished product. Fascinating, isn’t it? In the top row of the picture below, you see the same cups. In the picture on the right, the cups that ended up being blue look a bit more pink than the ones that were dipped in green glaze, but IRL there was hardly any difference at all: 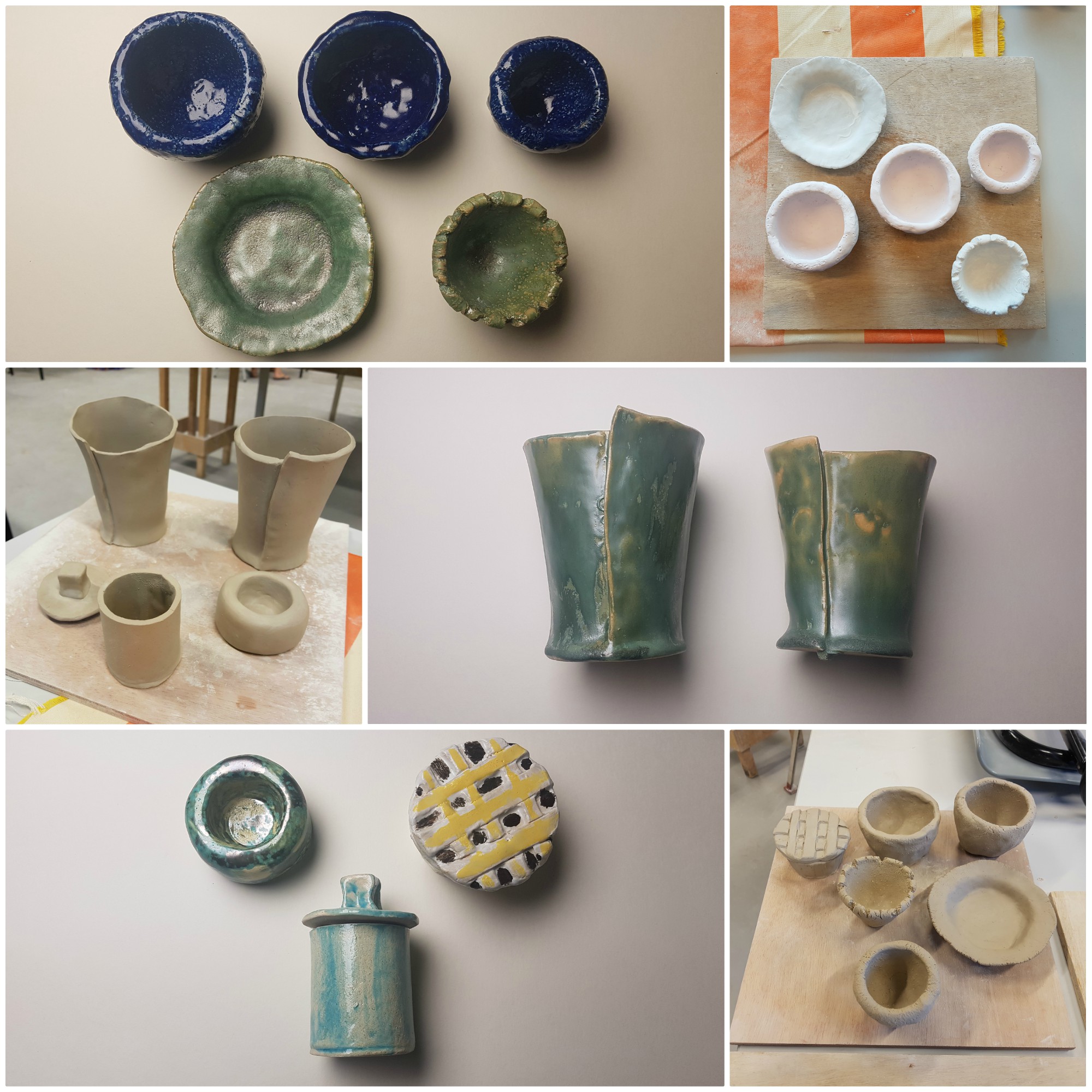 When making an object, you have to take into consideration that your object will be baked (at least) twice: one time to harden the clay, and the second time during the glazing process. Your object will shrink a couple of percent each time it’s baked, so your big mugs and cute little tea light holder will end up becoming… slightly smaller mugs and a regular candle holder.

Not only is there coarse, fine, and red clay, there’s also black clay, as seen above. While “wet” (picture left) it looks kinda brown, but after baking it is very dark brown to black; a bit darker than in the picture on the right. The effect of the glaze in combination with the black clay was surprising, mostly because there was no swatch of this glaze on black clay available. Hopefully, I’ll be able to make a bigger object out of black clay someday, I am very curious as to what it will look like. 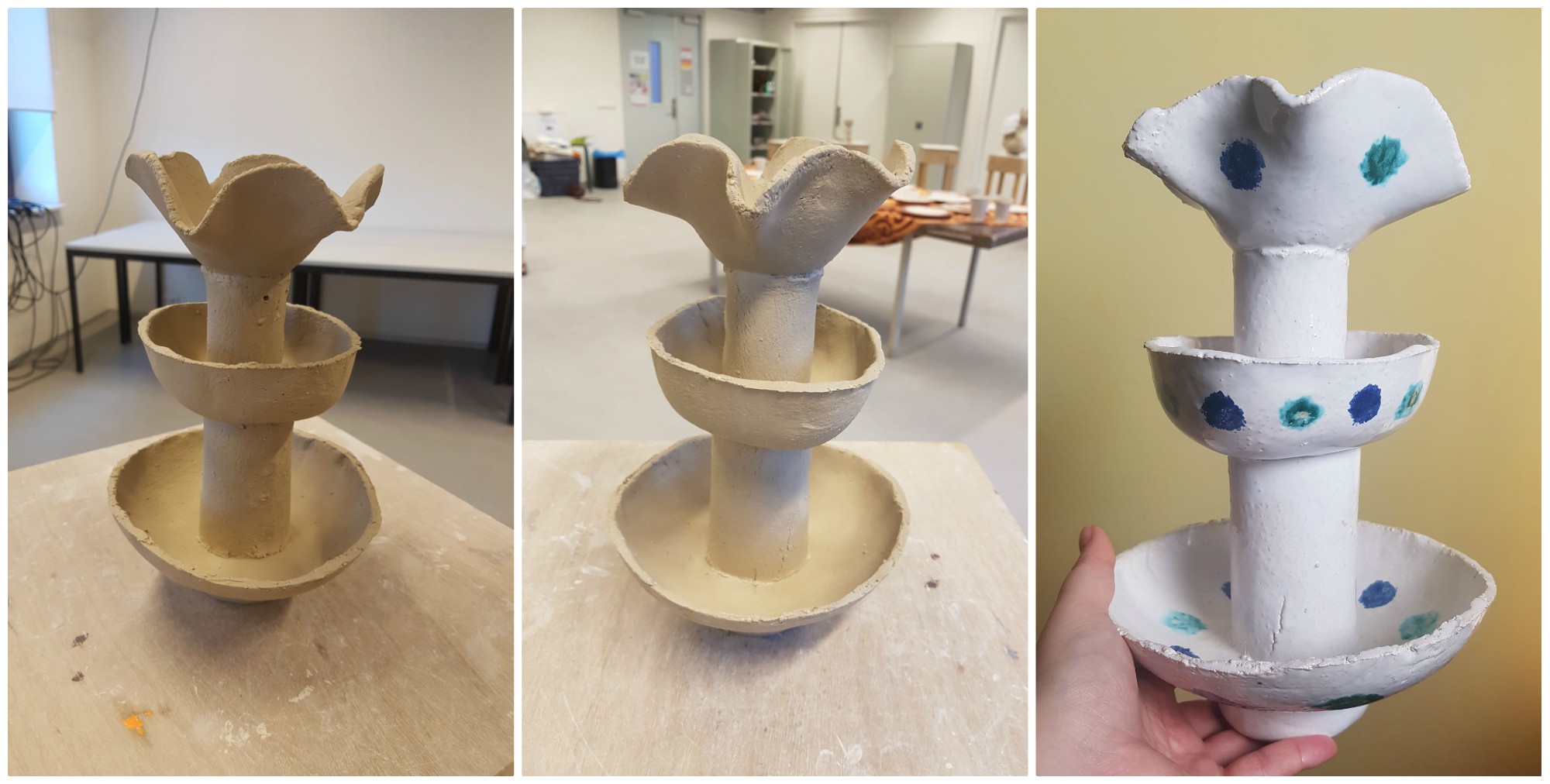 Speaking about bigger objects, in the pictures above you see my pièce de résistance (yes, I googled the direction of the accents) of the summer course: a three-tiered stand. The final assignment was: “Make a three-tiered stand”, so I did. I created the “bowls” by moulding plates of clay around paper cups. I made the “stems” by folding a clay plate into a roll. Putting the whole thing together was… an aventure. I had 15 minutes before the end of class and 1 1/2 hours until the final presentation. Needless to say, I was panicking. Thankfully, my ceramics teacher is a very chill person, and we managed to put it together within 20 minutes (picture on the left). It was then baked (middle picture) and eventually glazed (picture on the right). I am still in awe that it did not explode in the oven.

Last but not least, my final project from the 15 week course: the pumpkin. On the left you see the model and the first clay version. In the middle picture, you see the 6th version of the pumpkin, freshly airbrushed. And finally, on the left: the final product. Whereas everybody else in the class managed to effortlessly replicate a piece of fruit or a vegetable within one class, I spent a whopping 4 (partial) classes to get anywhere. It was an extremely frustrating process, with me yelling that I was going to chuck “that onion” out the window at least three times. Eventually however, I (with help from the teacher of course) managed to turn my onion into a real pumpkin. Like I’ve written before: I, sadly, have no natural talent when it comes to the arts. What I do have is an enormous amount of perseverance. And quite a bit of experience using an air brush machine, because airbrushing it orange helped tremendously in taking it from onion to pumpkin. I never would have guessed that those airbrushing classes in make up school would ever come in handy in a completely different context, but they did!