It was a light and sunny day when I, wig done, cat backpack ready, walked to the bus stop and sat down on the bench. Those who have followed me for a long time (on Instagram), have seen this view before: 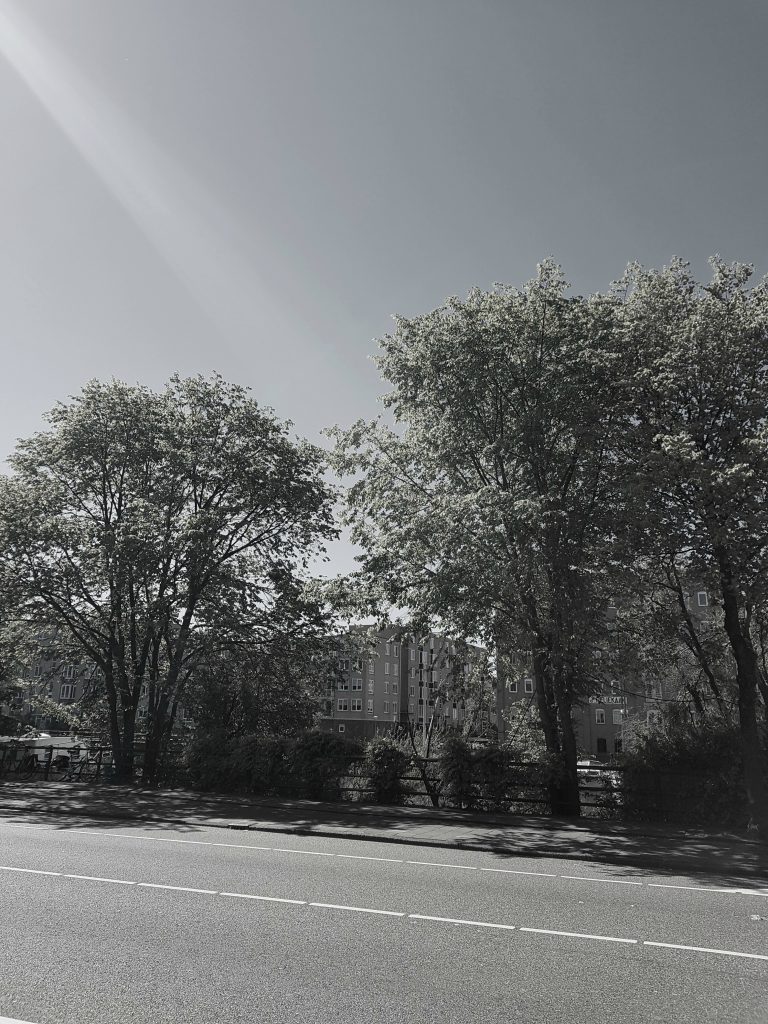 I waited for the bus that would take me to Amsterdam Central Station, where my tour would start. “Tour?” I hear some of you say, “Did you finally manage to fulfill your life goal of selling merch until your band takes off?” Uh, no, not really. Or actually, not at all. But I did manage to buy a super discounted 16 euro all day train pass and had decided to not only see Too Many Zooz perform at the Liberation Day festival in Zwolle, but also at the one in Groningen. If I just kept my pace up and caught the right trains, I’d be able to make it work. 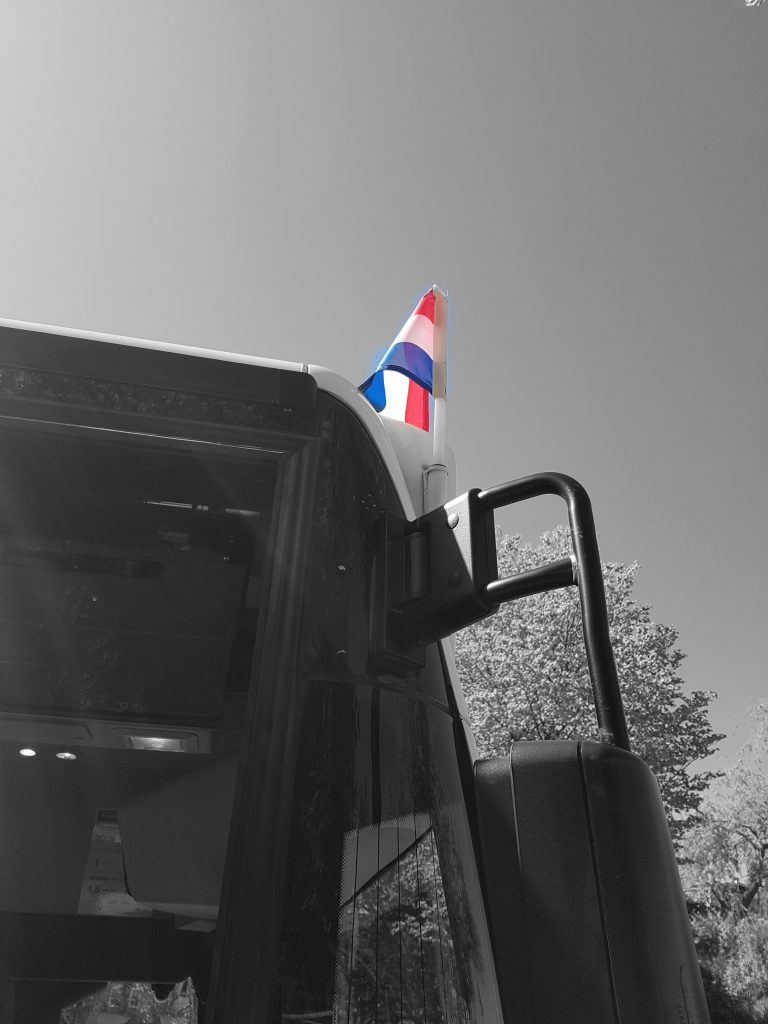 The bus, with it’s festive Dutch flag, was on time, so I caught the train to Zwolle. I was so impressed by having caught a train on time, that I completely forgot to take pictures during the trip. The following picture was taken in Zwolle, while slowly shuffling towards the festival location in a huge group of people: 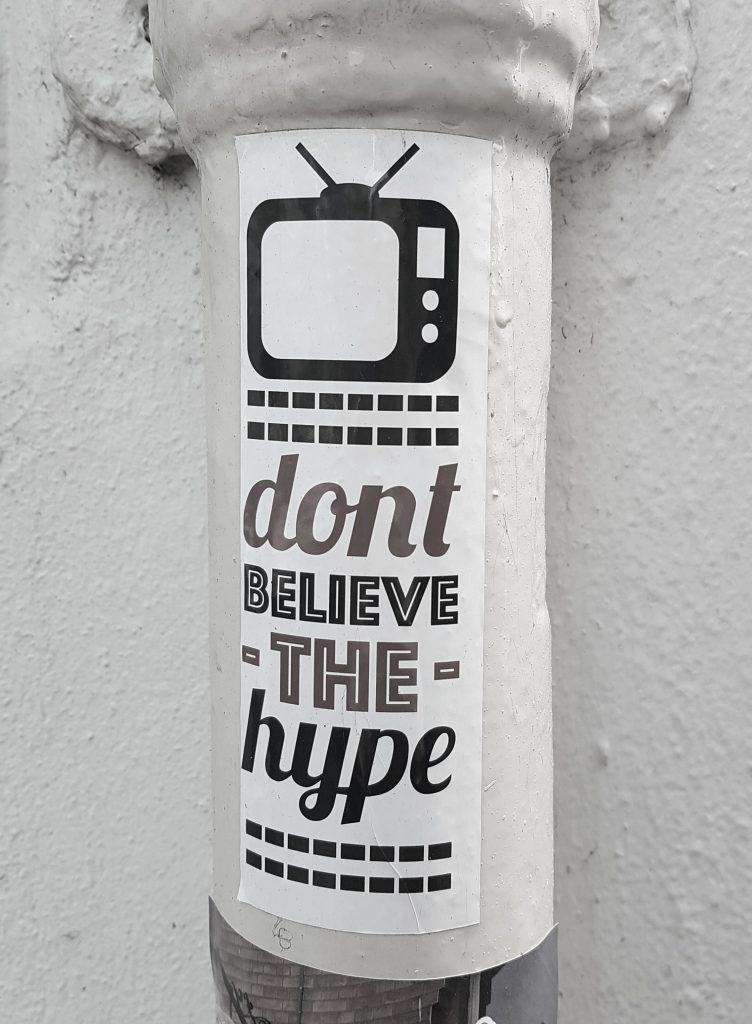 Regarding that huge group of people: I wasn’t expecting it to be that busy. The last time I’d been at the Liberation Day festival in Zwolle was way back in the 90’s, when it was still a small affair on the town square. Now it was a huge festival, about as big as the Pinkpop festival I went to in 1995, which was both the first and only time I ever went to any festival. Yup, I’m Old. Me not considering how busy it would be was a blessing, because had I known how massive this event was, I would not have gone. Which would have meant me missing out on my 4th and 5th Too Many Zooz gig in, uh,  7 1/2 weeks time. #fangirl

I slowly shuffeld on, got frisked at the entrance, then sped to the toilets and then the stage. I was early: 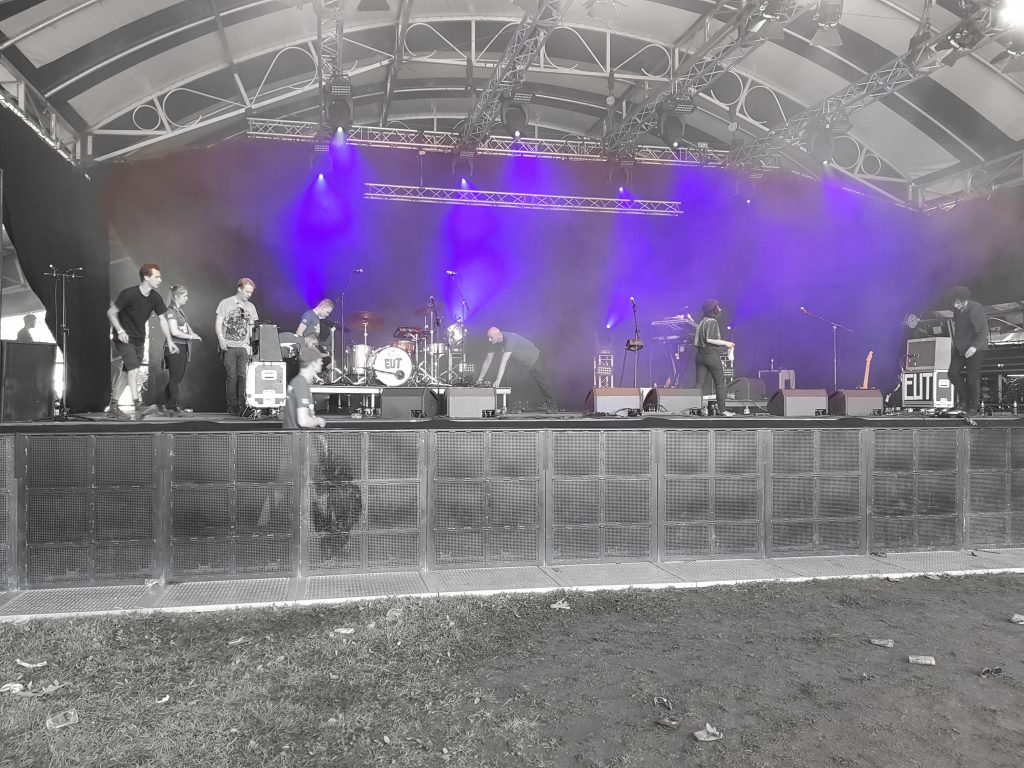 Since it was almost 30° C (86 F) and the stage was inside a tent, I decided to hang out close to the barrier. 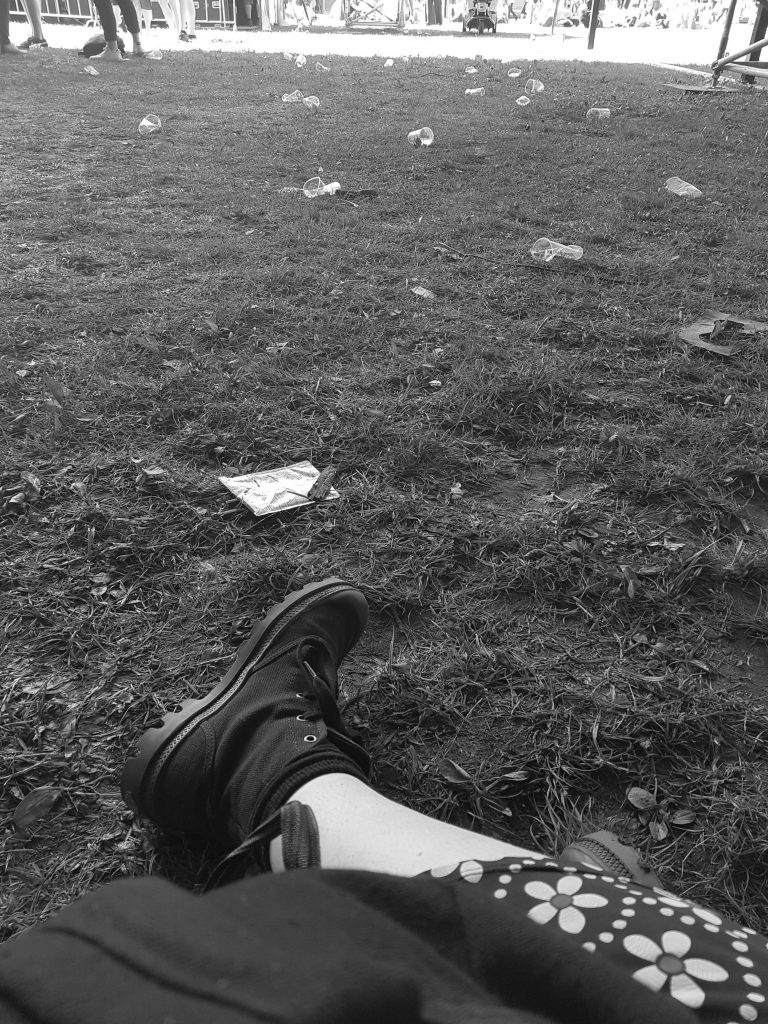 Pro-tip: always bring a trash bag to sit on.

Sound was checked, people came up to the stage, I handed out some ear plugs and it was Zooz time: 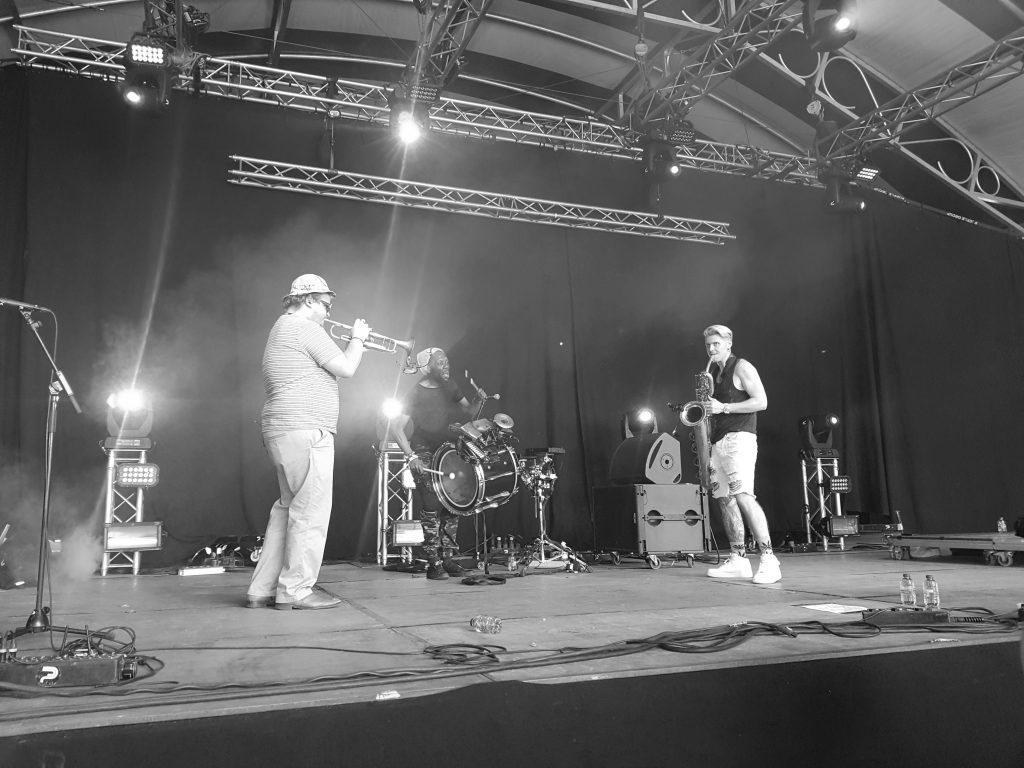 This was my first time seeing them at a festival and not at one of their own shows, where everybody knows who they are and goes hard from the first beat. The Zooz however went as hard as ever, and within 10 minutes the audience did the same.

While I would have loved to see some other bands at the festival, I needed to leave immediately to catch my train to Groningen. 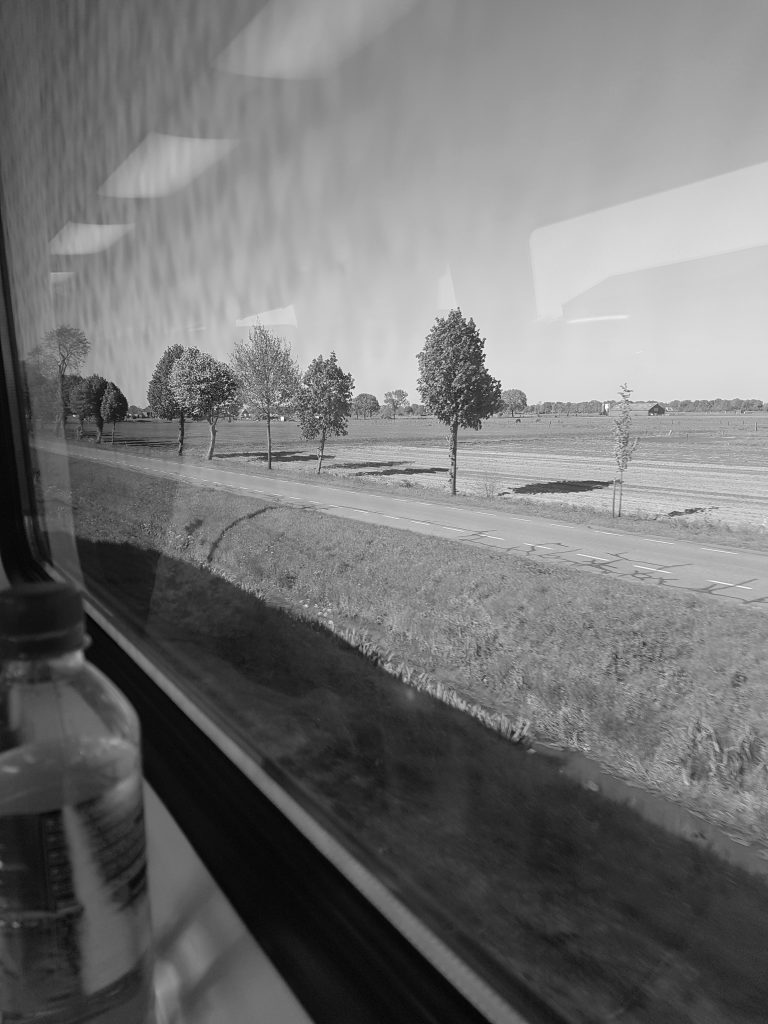 Which I managed to do.

The journey took about an hour, giving me some time to breathe and cool off.

Once in Groningen, I decided to walk in the direction of the Stadspark, where the festival was. There were supposed to be busses somewhere, but it was very unclear to me where that “somewhere” was, and I was afraid to get lost and miss the show. I started walking in a speedy pace and quickly found the entrance to the park. 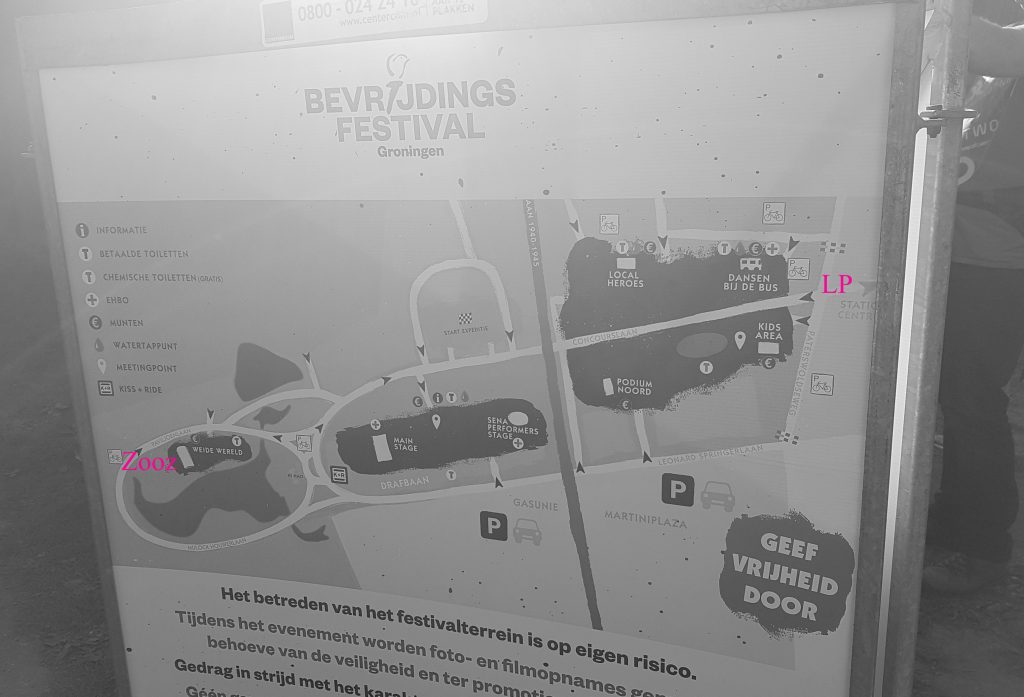 As you can see, there was still quite a large distance for “LP” to walk until she got to “Zooz”. This festival too was very busy, and after what felt like wading throught huge crows for 30 minutes, I checked my phone, only to see that I had only been walking for 10 minutes. At some point we had to walk underneath a bridge: 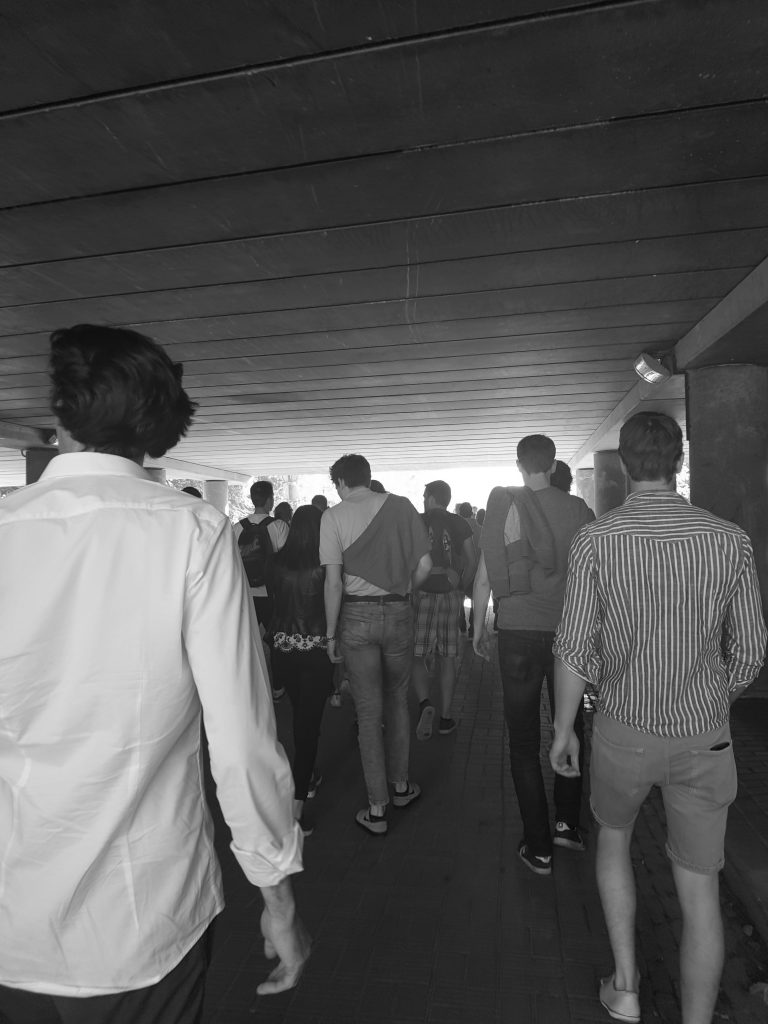 and I DIDN’T freak out, which is a first. I just kept walking towards my goal. Which was still very, very far away. Just when I was starting to lose hope and questioning the sanity of this endeavour, I saw this sign indicating the stage: 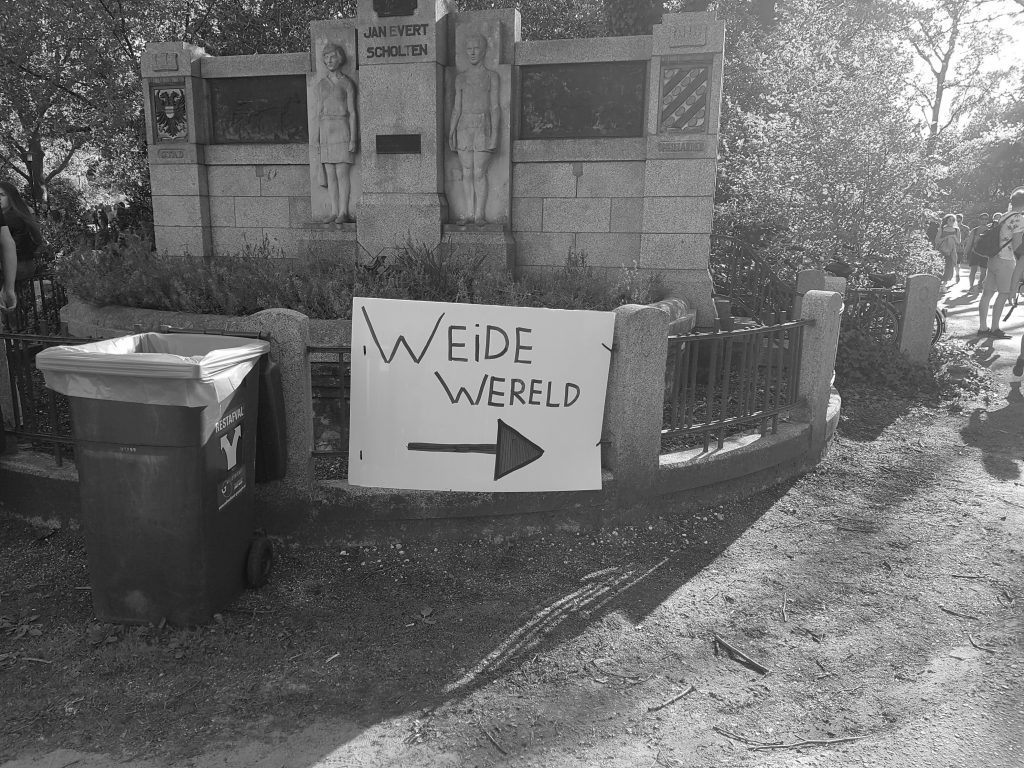 I walked on for 15 minutes, hopped, skipped and jumped over people chilling on the grass and… 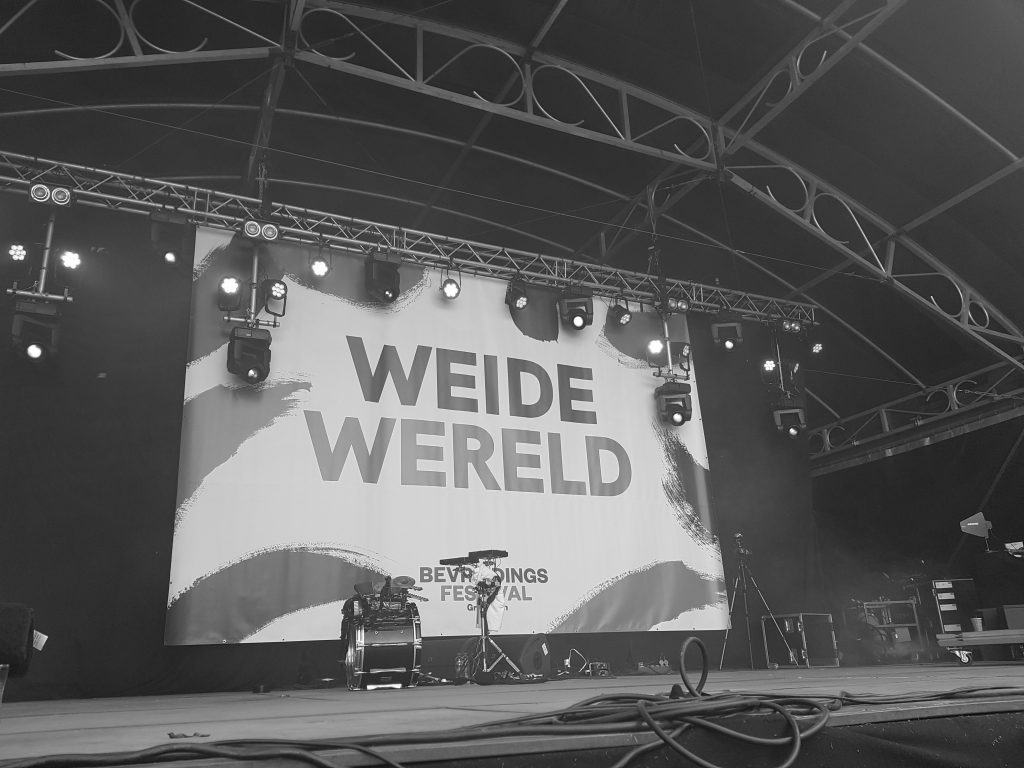 Slowly but surely an audience formed, and after an introduction, there they were: 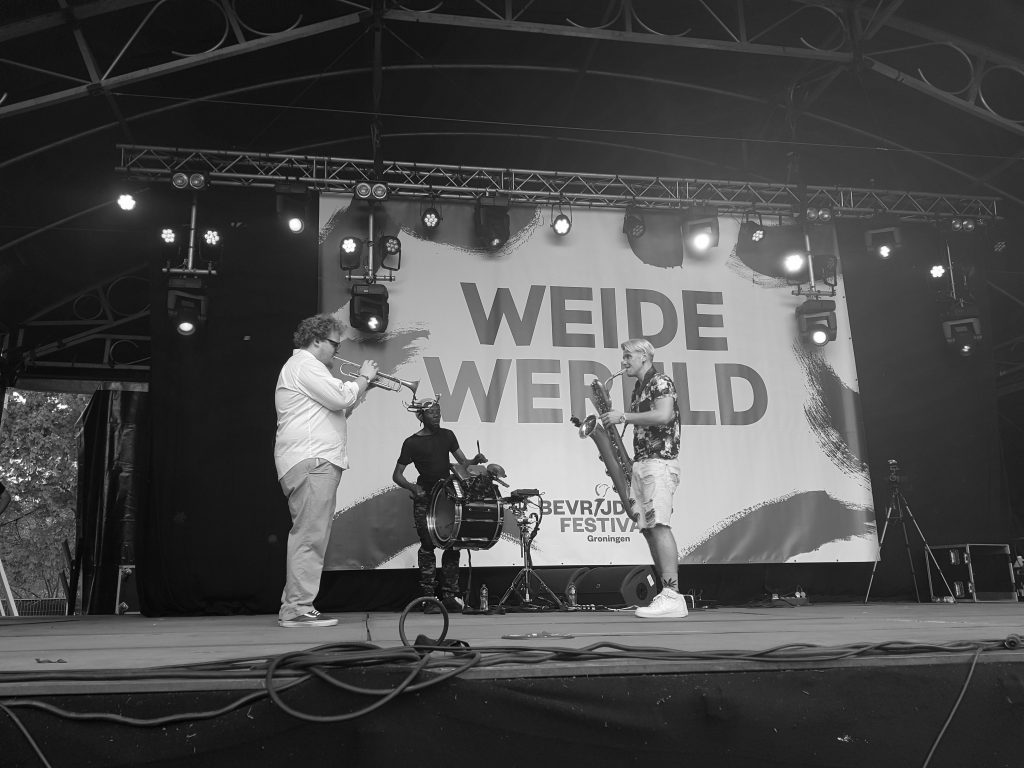 It was literally an all ages show, and after an hour of dancing I felt and looked like I’d taken a shower. With all my clothes on.

And now I had to get back home! For a second, while I was literally chilling out on a bench for a bit, I figured I might just stay in the park forever – maybe it was time for me to try living in nature for a while. I quickly realised that I had a Willa at home waiting for me, so I dragged myself in towards Groningen Central Station. 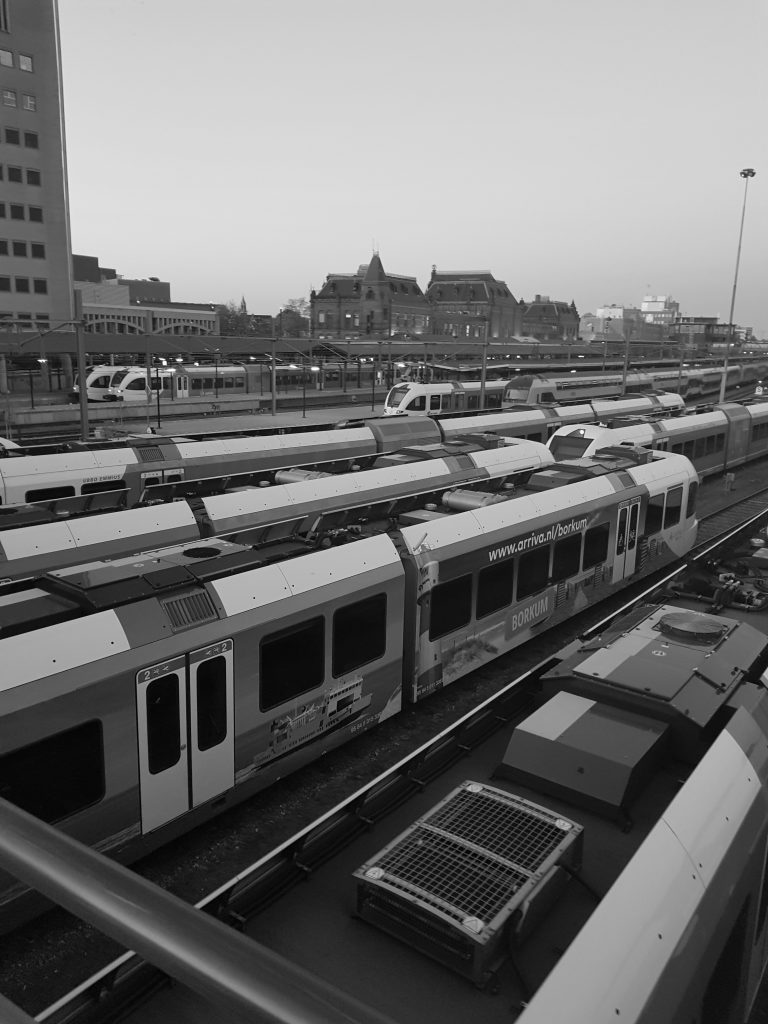 Back on the train, I took the obligatory “Tired, but happy”-selfie 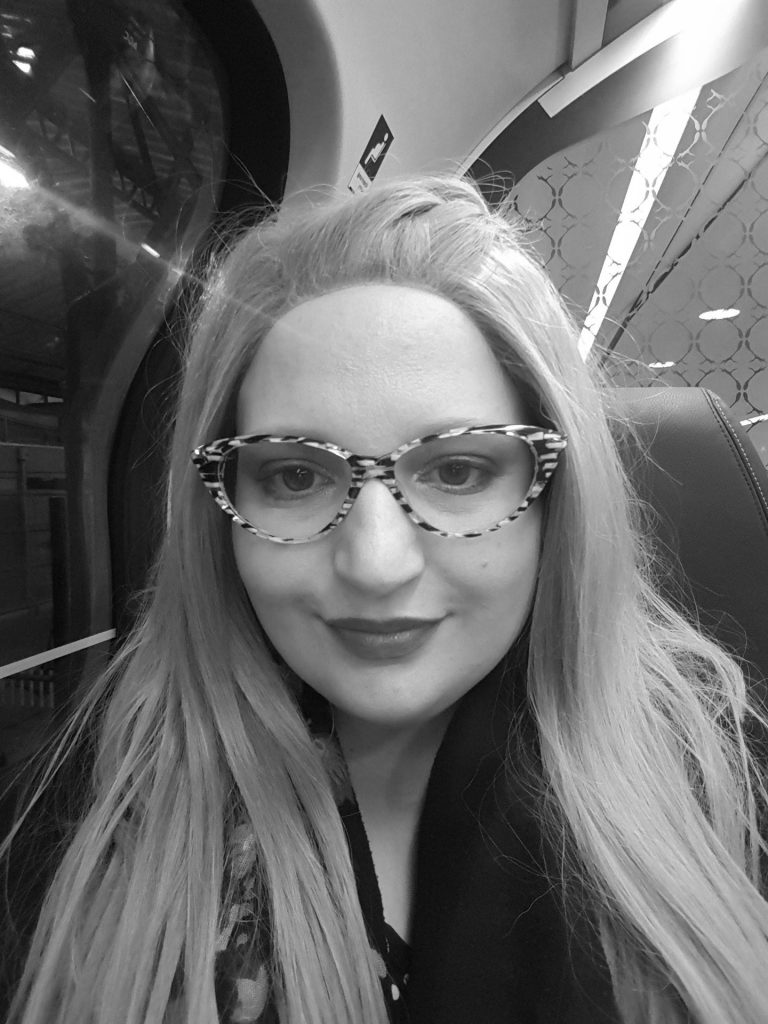 And after yet another 2 1/2 hours I was back at the bus stop in Amsterdam: 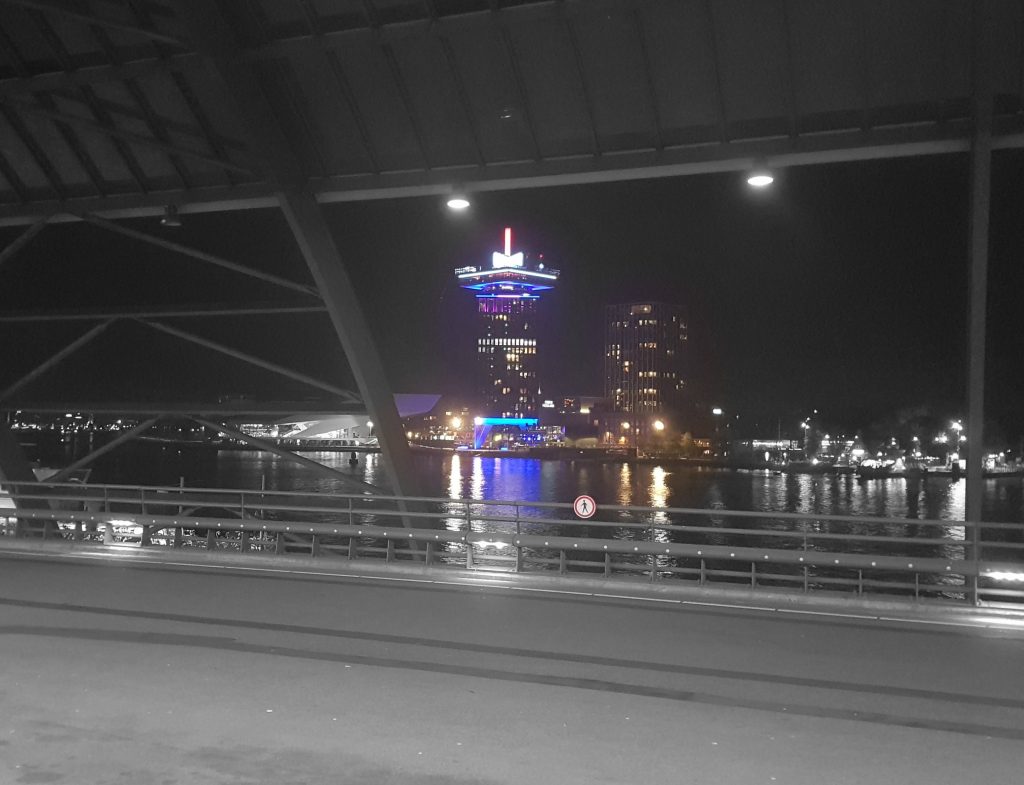 According to their Instastory, the members of Too Many Zooz were already in their hotel bed by then, as they had a journey to Brittany, France ahead of them the next day. Because that’s how they roll. #ontourforever