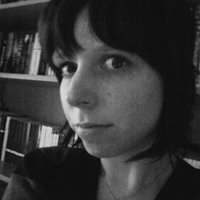 I am Samantha, also known as ChronicVillainy. I am what people would call a nerd or a geek, with my interests spanning books, games and anime/manga (“the Japanese stuff”). I have always been interested in stories and characters and read/watch material in different genres, depending on my mood. The same goes for games: they’re basically interactive narratives where you as the player are in charge of the progress of the story. You have the ability to influence the story not only by beating Monster A (or not beating it), but also by doing side quests. I mainly play games with a strong focus on narrative and characters. I really enjoy a game with a good story line, interesting world building, character development, and characters with depth and gray morality.

In my daily life I work in a book store. Every retail job cliché you’ve ever heard is true, although there are also really fun customers: I’ve had several interesting conversations about Stephen King’s writings, exchanged titles of good fantasy books with a customer, and of course discussed books I’ve read that customers are buying.

Another thing that brings me lots of joy in my life, is my dog Tali. I’m a big lover of animals – and dragons. 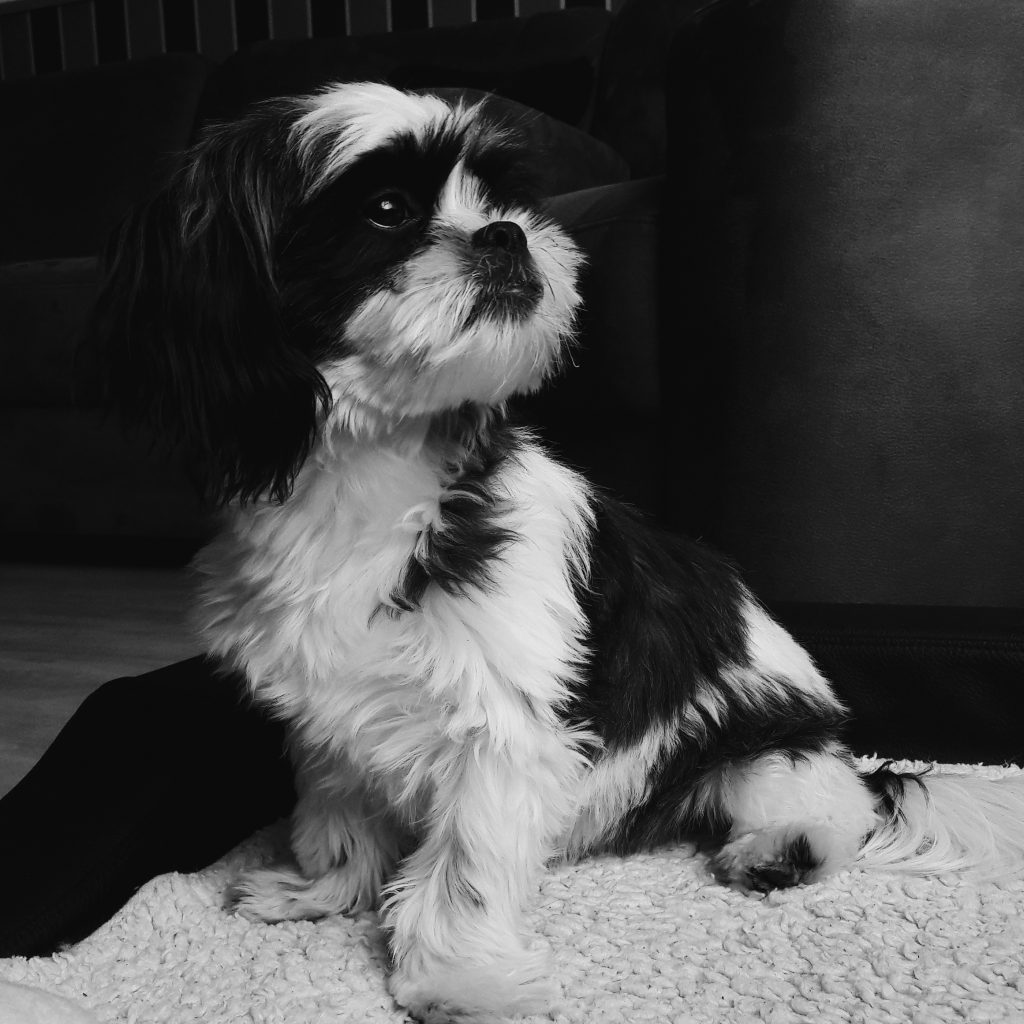 Where and when did your interest in stories start? In what way do stories play a part in your life?

I have loved stories from childhood on. My parents weren’t big readers, but they did encourage me to read and would regularly take me to the library to lend books. I absolutely adored stepping into a different world. For the longest time, my parents wouldn’t allow me to have a game console, but at 12 years old I finally got a PlayStation 1 so I could play the Spyro the (purple!) Dragon games. Then, during the Pokémon hype, I got a Nintendo 64 and on that console played my first Zelda game. That’s when I started appreciating games as a way of conveying good stories. I got into anime and manga a couple of years after that.

My hobbies are also related to my interest in stories: I write articles for AniWay, a Dutch magazine about Japanese pop culture. 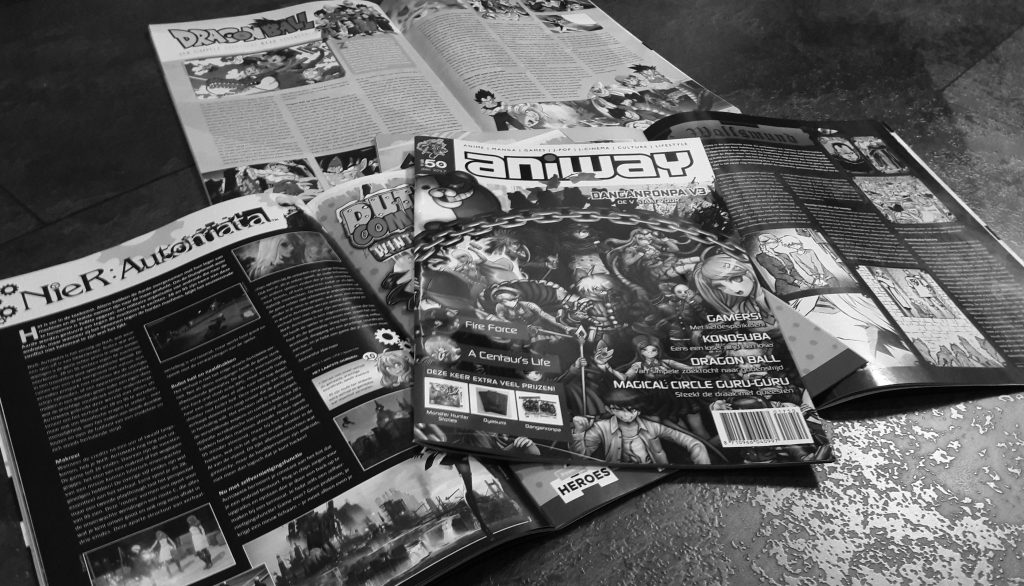 It’s a volunteer position, and I really enjoy it. I started off as a proof reader and then got my first shot as a writer when they needed an article at the last minute. I usually write reviews of anime/manga-series and games, but I have also written reviews of events. If somebody, even if it’s just one person, becomes interested in a series/game by reading my review, I will have reached my goal. And it’s also a great opportunity to discuss my favorite series at length – or to “responsibly” critique series that I’m not so fond of. On top of that, I am also an editor for the magazine. Since language and writing make me happy, I also keep a book review blog called Bookish Villainy.

I have also been known to draw, mostly fan art. 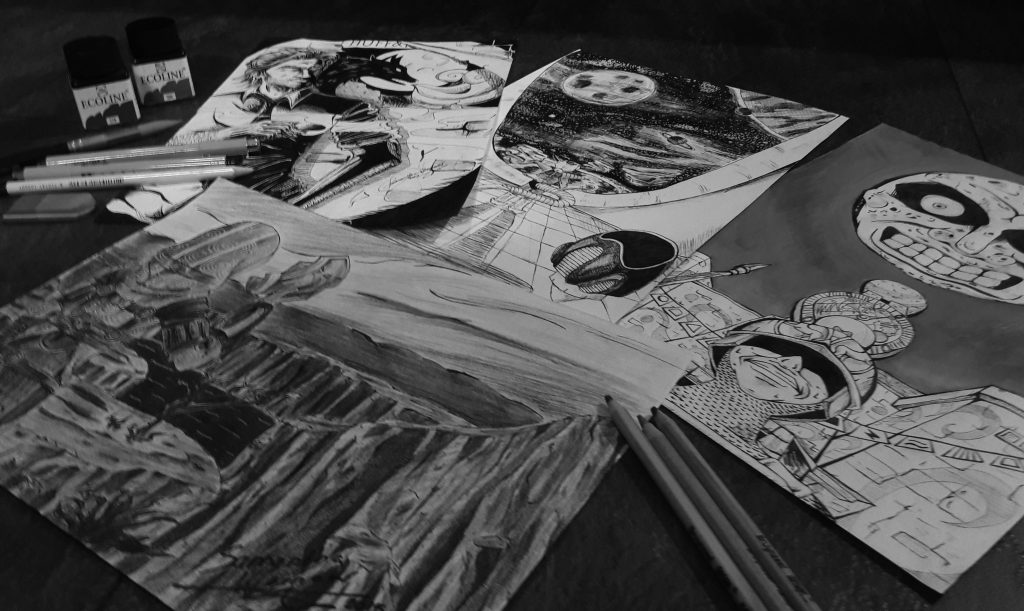 For me, it’s a way to show my appreciation for a series/character. My former hobbies (cosplay, role playing and figurine collecting) were also ways of doing that, but with drawing I have the most freedom, as I can focus on the parts of a series/game/character that interest me. It is, however, a thing that takes time and, despite having lots of ideas, daily life gets in the way sometimes. Sharing my art online (on DeviantArt for example) has led to interesting interactions with fellow fans with my art giving them a new perspective not previously considered within the fandom.

The origin of stories (like mythology or folklore) is also something that interests me, as does the ability to get a point of view completely different from your own. I think that’s very valuable.

Creativity plays a big role in your life. How did that start?

I’ve been drawing and writing since I was little. I used to make up stories and draw corresponding images. I always wanted to be an artist or a writer (or a vet) when I grew up, none of which really happened. It’s a very gratifying hobby though. My drawing became more “serious” when Dragon Ball Z started being broadcast here in The Netherlands. I drew pages and pages of fan art, and while these drawings weren’t really good, they were the beginning of me wanting to show my appreciation for something and using art to do it.

Could you tell us more about the topics of your BA and MA theses, and how you came to write about these topics?

My BA thesis is called “Revisiting Wonderland: Neo-Victorianism and Female Empowerment in American McGee’s Video Game Adaptations of Alice in Wonderland”. It deals with two video games by American McGee: “Alice” and “Alice: Madness Returns”. Both are dark and “gothic” adaptations of the Alice in Wonderland story, but while playing the latter game I particularly noticed the Victorian symbolism in Wonderland. This symbolism however is very much the cliché that we have of what the Victorian era was like, that we often see in adaptations of Victorian works. I was curious of these clichés were put in the game just for “darkness’sake” or that there was more to it. In my thesis I analysed the symbolism and compared it to well known neo-Victorian tropes, and I concluded that the games cleverly used the symbolism to convey a message of Female Empowerment.

My MA thesis is called “Someone had Vomited Over the Round Table: The Shift from Malory and Bakhtin’s Grotesque Realism in Bernard Cornwell’s The Warlord Chronicles”. Yes, I am very proud of the title. During my English studies I became interested in the King Arthur legend, especially in the fascinating ways that different writers have interpreted the legend. “The Warlord Chronicles” by van Bernard Cornwell is one of my favorite books, despite it being a very free (and gritty) adaptation. 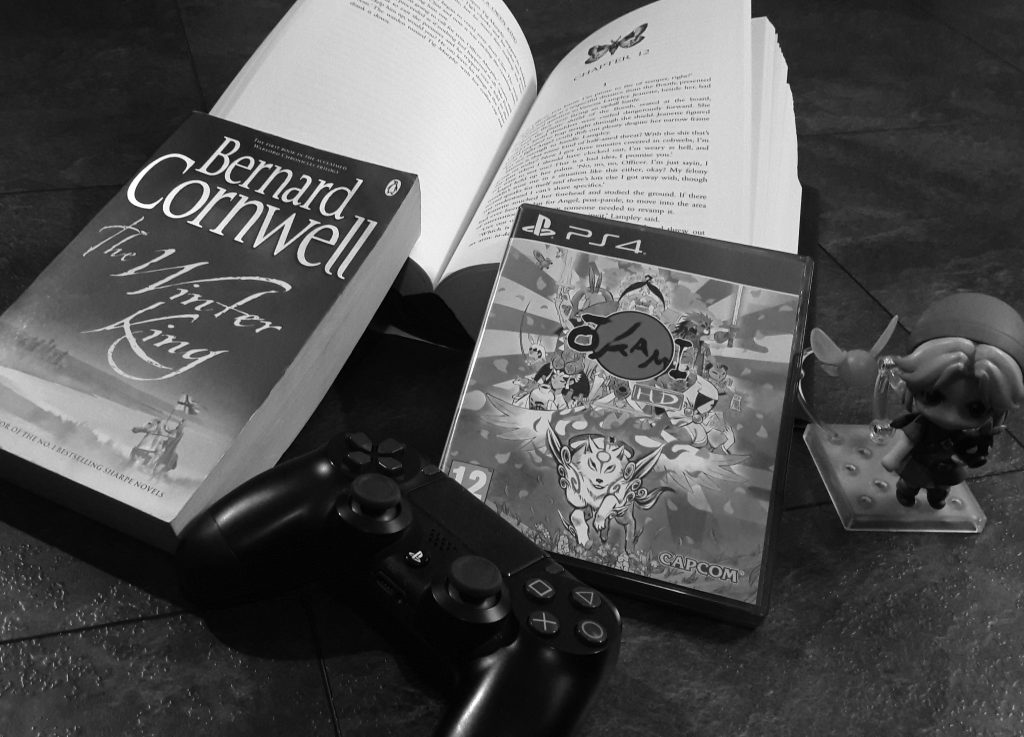 I really wanted to write my MA thesis about this book, and ended up comparing Cornwell’s work to “Le Morte D’Arthur” by Sir Thomas Malory. In the old days, knights and nobles were seen as ideal, and “the physical” was considered something of the masses. In Malory’s work there’s graphic descriptions of bloody fights, but there’s few passages in which knights take a bath or eat. This in contrast with Cornwell’s work, which has the knights (refered to as warriors) belching, having sex, eating, sweating and smelling each other’s breaths. Let’s just say that I quoted some… interesting passages in my thesis.

What do you want to achieve in life?

I would like to keep developing myself and adding something to the world, to create things and share them with others, both in my hobbies and in other areas of life.

Next week’s “Get out of the house!” will be about soap and how to make it. See you then!

Being yourself while looking for a job