Despite it only being the 25th, I’ve decided to cut April short here in Featured Mag today. Partially because this post is already long enough as it is, but also because the best part of the month has already happened: I got a new editorial assistant! Her name is Willa and she’s helping me edit as we speak: 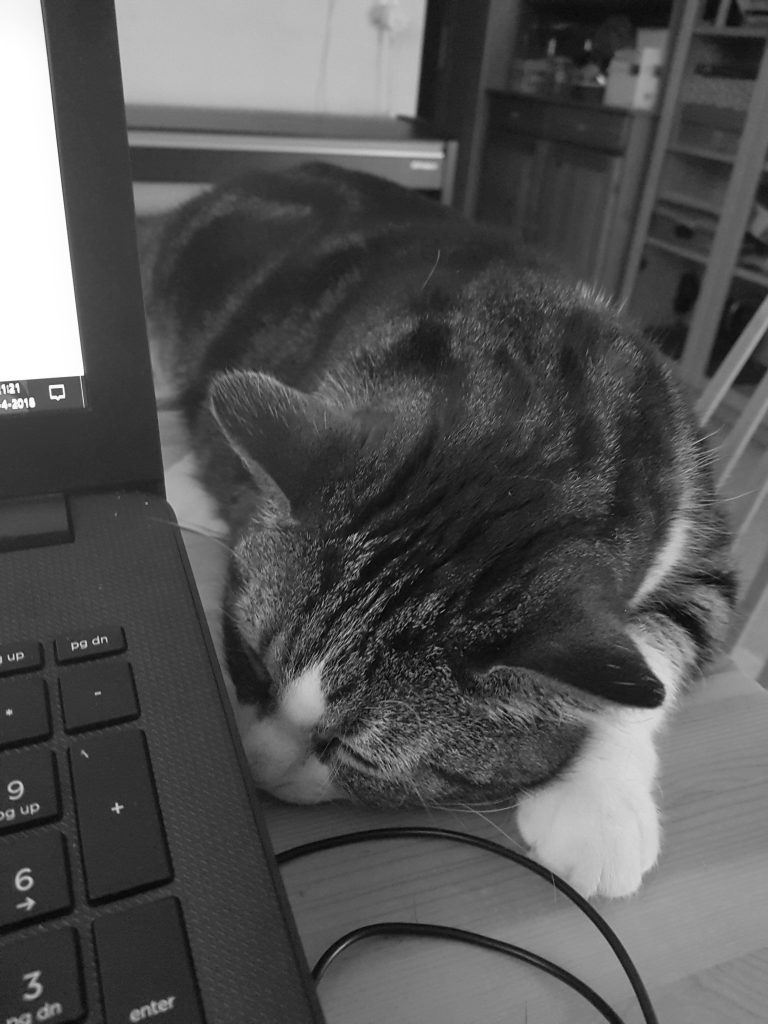 According to my Goodreads I finished one book this month, by Dodie. I didn’t know who she was before I read her book and I have no idea how this book even ended up on my to read list, but I am glad to have read it. The the writing, the layout and the drawings give the book a zine-y feel, which I like a lot. A warning though: Dodie has lived through a lot and is still having a hard time and she writes about this openly and explicitly. This is not one of those fun quick reads. The contents gave me a lot of food for thought and I had wished this book had been around when I was younger.

I also managed to read about half of “The Self Care Project”. I was looking for a non-vage, non-fluffy, non-“just take three baths a day with 10 dollar bath bombs”-type book, and I think I’ve found it. I will of course update my review as soon as I’ve finished it.

An article about Mike Yung, a singer who spent most of his adult life singing in the New York subway, only to go viral a couple of years ago and also be “discovered” on America’s Got Talent, and how this all (despite everybody assuming the contrary) hasn’t really made neither his life nor his career a lot easier.

How “that one photo” of James Dean came about.

Molly Ringwald wrote an excellent article on how she looks back nowadays on the movies “Pretty in Pink” and “The Breakfast Club” she made as a teenager.

Junot Diaz wrote a painful and intense article about how being sexually abused in his childhood influenced and distorted his life and relationships thoughout the rest of his life. About how hurt people hurt people.

The homelessness problem in Los Angeles is getting more and more out of hand. The LA Times covers this issue in words and images.

Levittown near Philadelphia was built to be the perfect suburb. Of course this “perfection” came with not-so-hidden awfulness.

Cosmetics company Deciem is the umpteenth cosmetics company entangled in scandals and drama. This article (Please note! There’s a picture of a dead sheep posted in this article. It’s not bloody, but you can see bones and fur) gives the entire time line. It’s almost as if people who decide to start a cosmetics company are, uh, very special *coughespeciallyawfulcough* people. To keep things positive, an interview with former co-ceo Nicola Kilner about her time in the company, being fired and her current world view. An interesting interview for anyone who’s spent an enormous amount of time, energy and love on something, but who all of a sudden ended up empty handed.

Legendary concert hall Paradiso is 50 years old! Dutch article on how this place came to be and how it evolved into the professional concert hall it is now. With film fragments from back in the day.

A Dutch article for anyone who’s ever wondered why houses are so damn expensive in The Netherlands.

Note: I’ve decided to no longer list the podcasts in Dutch in the English blogpost, as you can google translate an article/look at the pictures, but won’t be listening to a podcast in a language that sounds like “gggghhhgggtje”. If you are interested in which podcasts I listened to in Dutch, click on the Dutch flag to see the Dutch version of this blogpost. I don’t think I’ve ever used the word “Dutch” this much, ever.

In this episode of the podcast series The Essay, Deborah Bull, who’s one of my favorite ballerina’s ever talks about the cultural and societal impact of Nijinsky’s revolutionary ballet “The Rites of Spring”. Tipped to me by Daphne, this month’s interviewee.

The Problem with Apu – Comedian Hari Kondabolu’s documentary on Apu from The Simpsons and all things that are wrong with it. At first, The Simpsons responded to him in quite an unsympathetic way,  but today a YouTube clip from The Late Show with Stephen Colbert was posted on the internet in which voice actor Hank Azaria seems to have changed his mind on this matter. Hari has replied to him on his Twitter (ps: don’t read the comments).

Fake food – You’d love to take a bite, but that would be a bad idea. Best job ever, y/y?

The singing horses. And oldie, but goodie. Those who’ve been following me for a long time will know that I’ve been plugging them since 2004. They’re the best thing to have ever been posted on the internet, bar none.

Next week, I’ll be opening the month of May here on Featured Mag! See you then!

"Hand lettering with chalk" workshop at Dille & Kamille in Amsterdam